The demise of Qualcommâ€™s pending $44 billion purchase of NXP Semiconductors in late July along with growing regulatory reviews of chip merger agreements, efforts by countries to protect domestic technology, and the escalation of global trade friction all suggest semiconductor acquisitions are hitting a ceiling in the size of doable deals. Â It is becoming less likely that semiconductor acquisitions over $40 billion can be completed or even attempted in the current geopolitical environment and brewing battles over global trade.

IC Insights believes a combination of factorsâ€”including the growing high dollar value of major chip merger agreements, complexities in combining large businesses together, and greater scrutiny of governments protecting their domestic base of suppliersâ€”will stifle ever-larger mega-transactions in the semiconductor industry in the foreseeable future. Â Figure 1 ranks the 10 largest semiconductor merger and acquisition announcements and underscores the growth in size of these M&A transactions. Â Eight of the 10 largest announcements occurred in the last three years with only the biggest deal (Qualcomm buying NXP) failing to be completed. 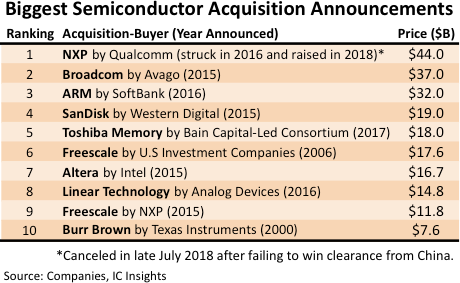 Qualcommâ€™s $44 billion cash purchase of NXP would have been the largest semiconductor acquisition ever if it was completed, but the dealâ€”originally announced in October 2016 at nearly $39 billion and raised to $44 billion in February 2018â€”was canceled in the last week of July because China had not cleared the transaction. Â China was the last country needed for an approval of the merger, and it was believed to be close to clearing the purchase in 2Q18, but growing threats of tariffs in a brewing trade war with the U.S. and moves to block Chinese acquisitions of American IC companies caused China to taken no action on the $44 billion acquisition in time for a deadline set by Qualcomm and NXP. Â U.S.-based Qualcomm canceled the acquisition on July 26 and quickly paid NXP in the Netherlands a $2 billion breakup fee so the two companies could move on separately.

Prior to Qualcommâ€™s failed $44 billion offer for NXP, the largest semiconductor acquisition was Avago Technologiesâ€™ $37 billion cash and stock purchase of Broadcom in early 2016. Â Avago renamed itself Broadcom Limited after the purchase and launched a failed $121 billion hostile takeover bid for Qualcomm at the end of 2017. Â It lowered the unsolicited bid to $117 billion in February 2018 after Qualcomm raised its offer for NXP to $44 billion. Â In March 2018, U.S. President Donald Trump blocked Broadcomâ€™s $117 billion takeover bid for Qualcomm after concerns were raised in the U.S. government about the potential loss of cellular technology leadership to Chinese companies, if the hostile acquisition was completed. After the presidential order, Broadcom executives said the company was considering other acquisition targets, with cash, that would be smaller and more focused.

The global semiconductor industry has been reshaped by a historic wave of mergers and acquisitions during the past three years, with about 100 M&A agreements being reached between 2015 and the middle of 2018 with the combined value of these transactions being more than $245 billion, based on data collected by IC Insights and contained within its Strategic Reviews database subscription service and in The 2018 McClean Report on the IC Industry. Â A record-high $107.3 billion in semiconductor acquisition agreements were announced in 2015. Â The second highest total for semiconductor M&A agreements was then reached in 2016 at $99.8 billion. Â  Semiconductor acquisition announcements reached a total value of $28.3 billion in 2017, which was twice the industryâ€™s annual average of about $12.6 billion in the first half of this decade but significantly less than 2015 and 2016, when M&A was sweeping through the chip industry at historic levels. Â In the first six months of 2018, semiconductor acquisition announcements had a total value of about $9.6 billion, based on IC Insightsâ€™ running tally of announced M&A deals.

The rebirth of the semiconductor industry

‘Building up’ stretchable electronics to be as multipurpose as your smartphone