A new technique makes it possible to obtain an individual fingerprint of the current-carrying edge states occurring in novel materials such as topological insulators or 2D materials. Physicists of the University of Basel present the new method together with American scientists in Nature Communications. 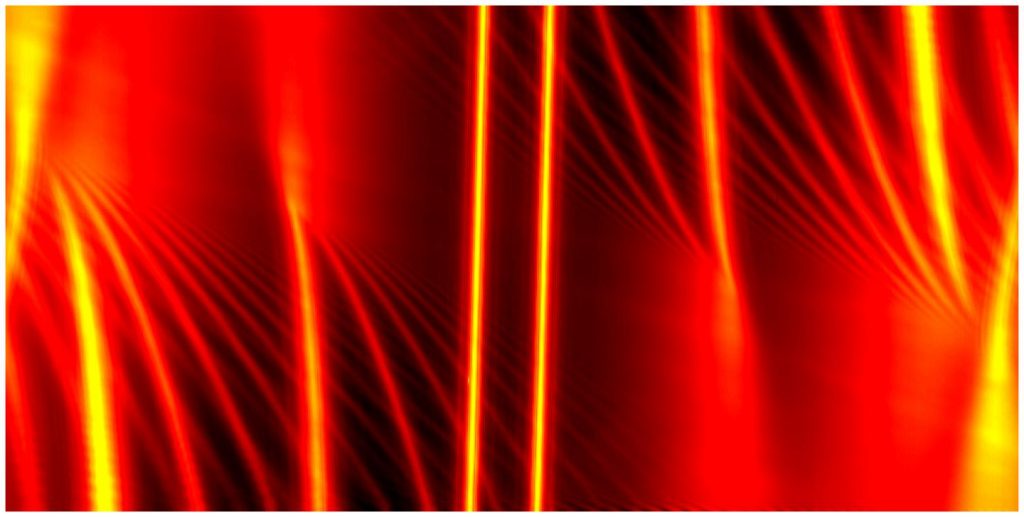 Measured tunneling current and its dependence on the two applied magnetic fields: The fans of red/yellow curves each correspond to a fingerprint of the conducting edge states. Each individual curve separately shows one of the edge states. Credit: University of Basel, Department of Physics

Such so-called topological insulators have attracted great interest in recent years due to their remarkable properties. In particular, their robust edge states are very promising since they could lead to great technological advances.

Currents flowing only along the edges

Similar effects as the edge states of such topological insulators also appear when a two-dimensional metal is exposed to a strong magnetic field at low temperatures. When the so-called quantum Hall effect is realized, current is thought to flow only at the edges, where several conducting channels are formed.

In order to measure the fingerprint of the conducting edge states, the physicists lead by Prof. Dominik ZumbĂĽhl have further developed a technique based on tunneling spectroscopy.

They have used a gallium arsenide nanowire located at the sample edge which runs in parallel to the edge states under investigation. In this configuration, electrons may jump (tunnel) back and forth between a specific edge state and the nanowire as long as the energies in both systems coincide. Using an additional magnetic field, the scientists control the momentum of tunneling electrons and can address individual edge states. From the measured tunneling currents, the position and evolution of each edge state may be obtained with nanometer precision.

This new technique is very versatile and can also be used to study dynamically evolving systems. Upon increasing the magnetic field, the number of edge states is reduced, and their distribution is modified. For the first time, the scientists were able to watch the full edge state evolution starting from their formation at very low magnetic fields.

With increasing magnetic field, the edge states are first compressed towards the sample boundary until eventually, they move towards the inside of the sample and then disappear completely. Analytical and numerical models developed by the research team agree very well with the experimental data.

“This new technique is not only very useful to study the quantum Hall edge states,” Dominik ZumbĂĽhl comments the results of the international collaboration. “It might also be employed to investigate new exotic materials such as topological insulators, graphene or other 2D materials.”