The market for microcontrollersâ€”the IC industryâ€™s original system-on-chip (SoC) product categoryâ€”is expected to continue hitting record-high annual revenues through 2022 after worldwide sales dropped 6% in 2016 because of a slowdown in MCU unit shipments. After drawing down MCU inventories in 2016, systems manufacturers stepped up purchases of microcontrollers in 2017 with unit shipments surging 22% and strong growth continuing in 2018. Â In its Mid-Year Update to The 2018 McClean Report, IC insights raised its projection for MCU shipments to 18% in 2018 with the unit volume reaching nearly 30.6 billion. MCU revenues are now forecast to rise 11% in 2018 to an all-time high of $18.6 billion, followed by 9% growth in 2019 to about $20.4 billion (Figure 1). 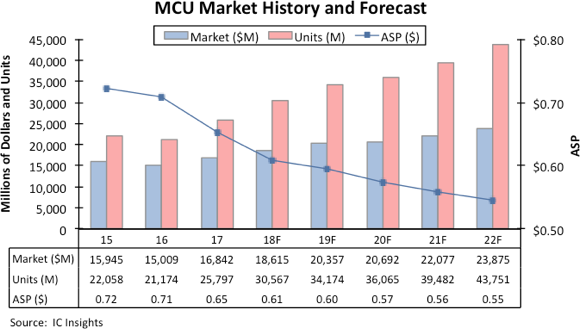 The Mid-Year Update also raised the five-year growth projection of MCU sales to a CAGR of 7.2%, reaching nearly $23.9 billion in 2022, with unit shipments increasing by a compound annual growth rate of 11.1% to about 43.8 billion in the final forecast year.

A key factor in the 2017 recovery of MCU sales from the decline in 2016 was a turnaround in the smartcard microcontroller segment. About 40% of total MCU shipments are currently for smartcard applications, but that is down from about half early in this decade. Excluding smartcard MCUs, sales of â€śgeneralâ€ť microcontrollers for embedded systems, automated control, sensing applications, and IoT-connected things are forecast to grow 11% in 2018 to $16.4 billion after rising 14% in 2017. Â Shipments of general MCUs are projected to climb 25% in 2018 to 18.9 billion units after rising 21% in 2017. Â  General microcontrollers now represent a little over 60% of MCU unit shipments and are forecast to reach 68% of the total in 2022. Â Currently, general MCUs generate about 88% of total microcontroller revenues, and they are expected to reach 90% of the entire market value in 2022.

Across nearly all MCU applications, strong growth in 32-bit microcontrollers has reshaped the market as suppliers aggressively promote more powerful designs that are cost competitive with 8-bit and 16-bit devices, which have typically been used in consumer products and other high-volume systems. Â In some cases new 32-bit MCUs are being priced below the cost of 8-bit microcontrollers. Â On average, 32-bit MCUs were selling for about twice the amount of the ASP for all microcontrollers in 2012 ($1.76 for 32-bit versus $0.88 for total MCUs). Â In 2018, the ASP for 32-bit MCUs is expected to be just $0.09 higher than the ASP for all MCUs, and by 2022, the difference is forecast to shrink to $0.05 ($0.60 for 32-bit versus an average of $0.55 for total MCUs).