A group of researchers at the UniversitĂ© de Sherbrooke in QuĂ©bec, Canada, reports the construction of the first reservoir computing device built with a microelectromechanical system (MEMS). Published in the Journal of Applied Physics, from AIP Publishing, the neural network exploits the nonlinear dynamics of a microscale silicon beam to perform its calculations. The groupâ€™s work looks to create devices that can act simultaneously as a sensor and a computer using a fraction of the energy a normal computer would use. 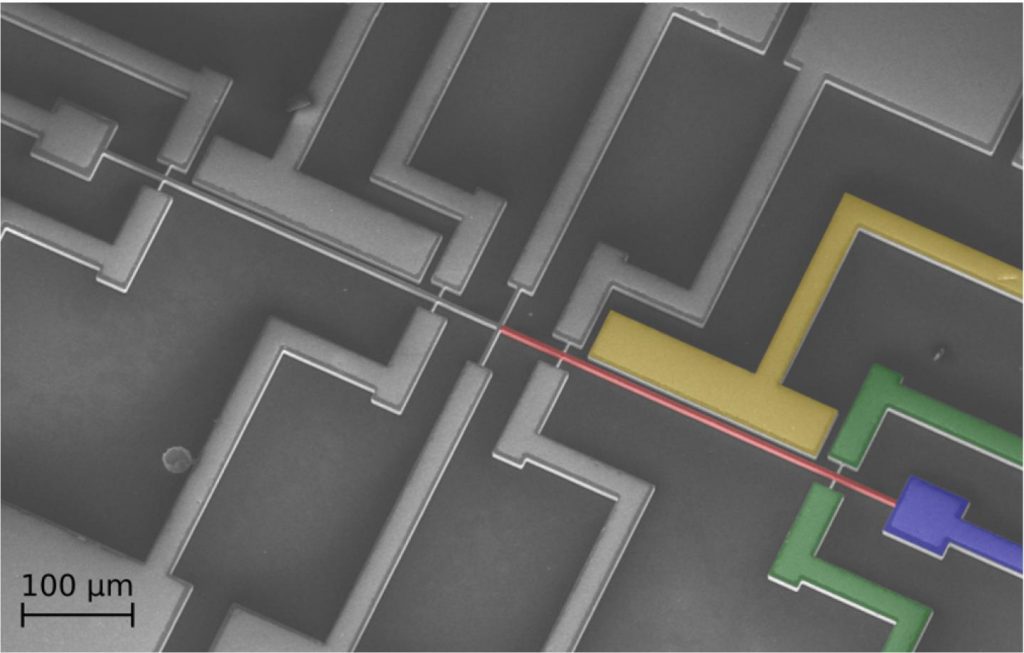 A single silicon beam (red), along with its drive (yellow) and readout (green and blue) electrodes, implements a MEMS capable of nontrivial computations. Credit: Guillaume Dion

The article appears in a special topic section of the journal devoted to “New Physics and Materials for Neuromorphic Computation,” which highlights new developments in physical and materials science research that hold promise for developing the very large-scale, integrated “neuromorphic” systems of tomorrow that will carry computation beyond the limitations of current semiconductors today.

“These kinds of calculations are normally only done in software, and computers can be inefficient,” said Guillaume Dion, an author on the paper. “Many of the sensors today are built with MEMS, so devices like ours would be ideal technology to blur the boundary between sensors and computers.”

The device relies on the nonlinear dynamics of how the silicon beam, at widths 20 times thinner than a human hair, oscillates in space. The results from this oscillation are used to construct a virtual neural network that projects the input signal into the higher dimensional space required for neural network computing.

In demonstrations, the system was able to switch between different common benchmark tasks for neural networks with relative ease, Dion said, including classifying spoken sounds and processing binary patterns with accuracies of 78.2 percent and 99.9 percent respectively.

“This tiny beam of silicon can do very different tasks,” said Julien Sylvestre, another author on the paper. “Itâ€™s surprisingly easy to adjust it to make it perform well at recognizing words.”

Sylvestre said he and his colleagues are looking to explore increasingly complicated computations using the silicon beam device, with the hopes of developing small and energy-efficient sensors and robot controllers.