Researchers from Intel Corp. and the University of California, Berkeley, are looking beyond current transistor technology and preparing the way for a new type of memory and logic circuit that could someday be in every computer on the planet.

In a paper appearing online Dec. 3 in advance of publication in the journal Nature, the researchers propose a way to turn relatively new types of materials, multiferroics and topological materials, into logic and memory devices that will be 10 to 100 times more energy-efficient than foreseeable improvements to current microprocessors, which are based on CMOS (complementary metal-oxide-semiconductor). 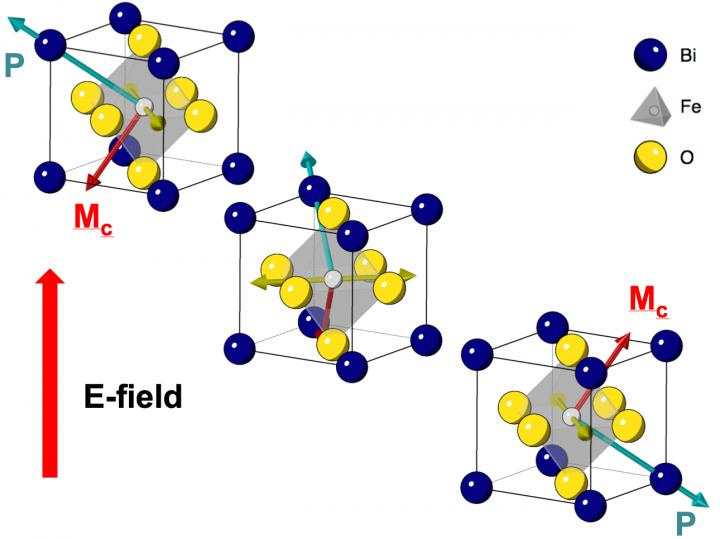 Single crystals of the multiferroic material bismuth-iron-oxide. The bismuth atoms (blue) form a cubic lattice with oxygen atoms (yellow) at each face of the cube and an iron atom (gray) near the center. The somewhat off-center iron interacts with the oxygen to form an electric dipole (P), which is coupled to the magnetic spins of the atoms (M) so that flipping the dipole with an electric field (E) also flips the magnetic moment. The collective magnetic spins of the atoms in the material encode the binary bits 0 and 1, and allow for information storage and logic operations. Credit: Ramamoorthy Ramesh lab, UC Berkeley

The magneto-electric spin-orbit or MESO devices will also pack five times more logic operations into the same space than CMOS, continuing the trend toward more computations per unit area, a central tenet of Mooreâ€™s Law.

The new devices will boost technologies that require intense computing power with low energy use, specifically highly automated, self-driving cars and drones, both of which require ever increasing numbers of computer operations per second.

“As CMOS develops into its maturity, we will basically have very powerful technology options that see us through. In some ways, this could continue computing improvements for another whole generation of people,” said lead author Sasikanth Manipatruni, who leads hardware development for the MESO project at Intelâ€™s Components Research group in Hillsboro, Oregon. MESO was invented by Intel scientists, and Manipatruni designed the first MESO device.

Transistor technology, invented 70 years ago, is used today in everything from cellphones and appliances to cars and supercomputers. Transistors shuffle electrons around inside a semiconductor and store them as binary bits 0 and 1.

In the new MESO devices, the binary bits are the up-and-down magnetic spin states in a multiferroic, a material first created in 2001 by Ramamoorthy Ramesh, a UC Berkeley professor of materials science and engineering and of physics and a senior author of the paper.

“The discovery was that there are materials where you can apply a voltage and change the magnetic order of the multiferroic,” said Ramesh, who is also a faculty scientist at Lawrence Berkeley National Laboratory. “But to me, ‘What would we do with these multiferroics?â€™ was always a big question. MESO bridges that gap and provides one pathway for computing to evolve”

In the Nature paper, the researchers report that they have reduced the voltage needed for multiferroic magneto-electric switching from 3 volts to 500 millivolts, and predict that it should be possible to reduce this to 100 millivolts: one-fifth to one-tenth that required by CMOS transistors in use today. Lower voltage means lower energy use: the total energy to switch a bit from 1 to 0 would be one-tenth to one-thirtieth of the energy required by CMOS.

“A number of critical techniques need to be developed to allow these new types of computing devices and architectures,” said Manipatruni, who combined the functions of magneto-electrics and spin-orbit materials to propose MESO. “We are trying to trigger a wave of innovation in industry and academia on what the next transistor-like option should look like.”

Internet of things and AI

The need for more energy-efficient computers is urgent. The Department of Energy projects that, with the computer chip industry expected to expand to several trillion dollars in the next few decades, energy use by computers could skyrocket from 3 percent of all U.S. energy consumption today to 20 percent, nearly as much as todayâ€™s transportation sector. Without more energy-efficient transistors, the incorporation of computers into everything – the so-called internet of things – would be hampered. And without new science and technology, Ramesh said, Americaâ€™s lead in making computer chips could be upstaged by semiconductor manufacturers in other countries.

“Because of machine learning, artificial intelligence and IOT, the future home, the future car, the future manufacturing capability is going to look very different,” said Ramesh, who until recently was the associate director for Energy Technologies at Berkeley Lab. “If we use existing technologies and make no more discoveries, the energy consumption is going to be large. We need new science-based breakthroughs.”

Paper co-author Ian Young, a UC Berkeley Ph.D., started a group at Intel eight years ago, along with Manipatruni and Dmitri Nikonov, to investigate alternatives to transistors, and five years ago they began focusing on multiferroics and spin-orbit materials, so-called “topological” materials with unique quantum properties.

“Our analysis brought us to this type of material, magneto-electrics, and all roads led to Ramesh,” said Manipatruni.

Multiferroics are materials whose atoms exhibit more than one “collective state.” In ferromagnets, for example, the magnetic moments of all the iron atoms in the material are aligned to generate a permanent magnet. In ferroelectric materials, on the other hand, the positive and negative charges of atoms are offset, creating electric dipoles that align throughout the material and create a permanent electric moment.

The key breakthrough came with the rapid development of topological materials with spin-orbit effect, which allow for the state of the multiferroic to be read out efficiently. In MESO devices, an electric field alters or flips the dipole electric field throughout the material, which alters or flips the electron spins that generate the magnetic field. This capability comes from spin-orbit coupling, a quantum effect in materials, which produces a current determined by electron spin direction.

“We are looking for revolutionary and not evolutionary approaches for computing in the beyond-CMOS era,” Young said. “MESO is built around low-voltage interconnects and low-voltage magneto-electrics, and brings innovation in quantum materials to computing.”

Worldwide semiconductor equipment billings drop to $15.8B in third quarter 2018