Researchers have demonstrated nanomaterial-based white-light-emitting diodes (LEDs) that exhibit a record luminous efficiency of 105 lumens per watt. Luminous efficiency is a measure of how well a light source uses power to generate light. With further development, the new LEDs could reach efficiencies over 200 lumens per watt, making them a promising energy-efficient lighting source for homes, offices and televisions. 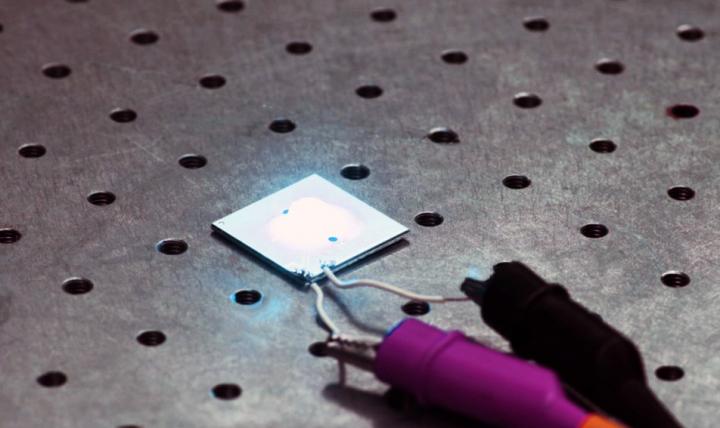 Researchers created nanomaterial-based white LEDs that exhibit a record high efficiency thanks to quantum dots that are suspended in solution rather than embedded in a solid. The new LEDs could offer an energy-efficient lighting source for homes, offices and televisions. Credit: Sedat Nizamoglu, KoĂ§ University

“Efficient LEDs have strong potential for saving energy and protecting the environment,” said research leader Sedat Nizamoglu, KoĂ§ University, Turkey. “Replacing conventional lighting sources with LEDs with an efficiency of 200 lumens per watt would decrease the global electricity consumed for lighting by more than half. That reduction is equal to the electricity created by 230 typical 500-megawatt coal plants and would reduce greenhouse gas emissions by 200 million tons.”

The researchers describe how they created the high-efficiency white LEDs in Optica, The Optical Societyâ€™s journal for high impact research. The new LEDs use commercially available blue LEDs combined with flexible lenses filled with a solution of nano-sized semiconductor particles called quantum dots. Light from the blue LED causes the quantum dots to emit green and red, which combines with the blue emission to create white light.

“Our new LEDs reached a higher efficiency level than other quantum dot-based white LEDs,” said Nizamoglu. “The synthesis and fabrication methods for making the quantum dots and the new LEDs are easy, inexpensive and applicable for mass production.”

To create white light with todayâ€™s LEDs, blue and yellow light are combined by adding a yellowish phosphor-based coating to blue LEDs. Because phosphors have a broad emission range, from blue to red, it is difficult to sensitively tune the properties of the generated white light.

Unlike phosphors, quantum dots generate pure colors because they emit only in a narrow portion of the spectrum. This narrow emission makes it possible to create high-quality white light with precise color temperatures and optical properties by combining quantum dots that generate different colors with a blue LED. Quantum dots also bring the advantage of being easy to make and the color of their emission can be easily changed by increasing the size of the semiconductor particle. Moreover, quantum dots can be advantageously used to generate warm white light sources like incandescent light bulbs or cool white sources like typical fluorescent lamps by changing the concentration of incorporated quantum dots.

Although quantum dots embedded in a film are currently used in LED televisions, this lighting approach is not suitable for widespread use in general lighting applications. Transferring the quantum dots in a liquid allowed the researchers to overcome the problematic drop in efficiency that occurs when nanomaterials are embedded into solid polymers.

Making efficient white LEDs requires quantum dots that efficiently convert blue light to red or green. The researchers carried out more than 300 synthesis reactions to identify the best conditions, such as temperature and time of the reaction, for making quantum dots that emit at different colors while exhibiting optimal efficiency.

“Creating white light requires integrating the appropriate amount of quantum dots, and even if that is accomplished, there are an infinite number of blue, green and red combinations that can lead to white,” said Nizamoglu. “We developed a simulation based on a theoretical approach we recently reported and used it to determine the appropriate amounts and best combinations of quantum dot colors for efficient white light generation.”

To make the new LEDs, the researchers filled the space between a polymer lens and LED chip with a solution of quantum dots that were synthesized by mixing cadmium, selenium, zinc and sulfur at high temperatures. The researchers used a type of silicone to make the lens because its elasticity allowed them to inject solutions into the lens without any solution leaking out, and the materialâ€™s transparency enabled the necessary light transmission.

The researchers showed that their liquid-based white LEDs could achieve an efficiency double that of LEDs that incorporate quantum dots in solid films. They also demonstrated their white LEDs by using them to illuminate a 7-inch display.

As a next step, the researchers are working to increase the efficiency of the LEDs and want to reach high efficiency levels using environmentally friendly materials that are cadmium- and lead-free. They also plan to study the liquid LEDs under different conditions to ensure they are stable for long-term application.

AI and quantum computing: The third and fourth exponentials

Discovering the potential serial innovators in our midst

Proving the benefits of data analysis

The devilish details of EUV lithography

FET fabrication from fins to nano-sheets