A paper published in Nature Communications by Sufei Shi, assistant professor of chemical and biological engineering at Rensselaer, increases our understanding of how light interacts with atomically thin semiconductors and creates unique excitonic complex particles, multiple electrons, and holes strongly bound together. These particles possess a new quantum degree of freedom, called “valley spin.” The “valley spin” is similar to the spin of electrons, which has been extensively used in information storage such as hard drives and is also a promising candidate for quantum computing. 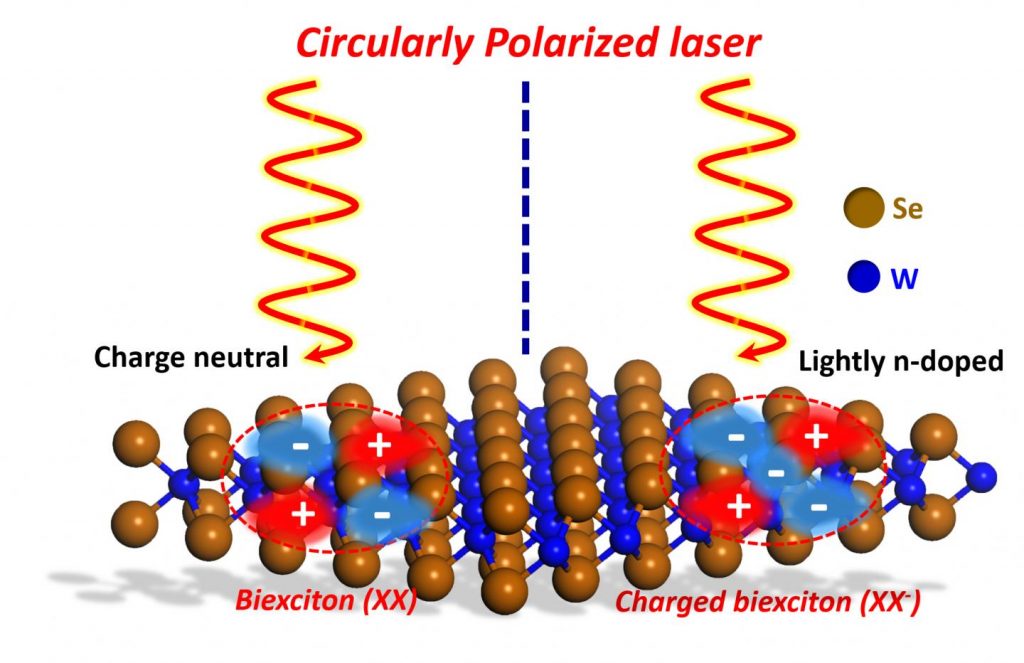 The paper, titled “Revealing the biexciton and trion-exciton complexes in BN encapsulated WSe2,” was published in the Sept. 13, 2018, edition of Nature Communications. Results of this research could lead to novel applications in electronic and optoelectronic devices, such as solar energy harvesting, new types of lasers, and quantum sensing.

Shiâ€™s research focuses on low dimensional quantum materials and their quantum effects, with a particular interest in materials with strong light-matter interactions. These materials include graphene, transitional metal dichacogenides (TMDs), such as tungsten diselenide (WSe2), and topological insulators.

TMDs represent a new class of atomically thin semiconductors with superior optical and optoelectronic properties. Optical excitation on the two-dimensional single-layer TMDs will generate a strongly bound electron-hole pair called an exciton, instead of freely moving electrons and holes as in traditional bulk semiconductors. This is due to the giant binding energy in monolayer TMDs, which is orders of magnitude larger than that of conventional semiconductors. As a result, the exciton can survive at room temperature and can thus be used for application of excitonic devices.

At Rensselaer, Shiâ€™s team has developed a way to build an extremely clean sample to reveal this unique light-matter interaction. The device was built by stacking multiple atomically thin materials together, including graphene, boron nitride (BN), and WSe2, through van der Waals (vdW) interaction, representing the state-of-the-art fabrication technique of two-dimensional materials.

This work was performed in collaboration with the National High Magnetic Field Laboratory in Tallahasee, Florida, and researchers at the National Institute for Materials Science in Japan, as well as with Shengbai Zhang, the Kodosky Constellation Professor in the Department of Physics, Applied Physics, and Astronomy at Rensselaer, whose work played a critical role in developing a theoretical understanding of the biexciton.

The results of this research could potentially lead to robust many-particle optical physics, and illustrate possible novel applications based on 2D semiconductors, Shi said. Shi has received funding from the Air Force Office of Scientific Research. Zhang was supported by the Department of Energy, Office of Science.

Research on light-matter interaction could improve electronic and optoelectronic devices