Time to catch up on some very important industry activities…

Toshiba has announced development of its BiCS flash three-dimensional (3D) flash memory utilizing through-silicon via (TSV) technology [link]. Shipments of prototypes will begin in June 2017, and product samples will be shipped in the second half of 2017. Prototypes were shown at the 2015 Flash Memory Summit.[link 2]

Digitimes reports rumors in Taiwan that TSMC will expand its CoWoS (Chip on Wafer on Substrate) packaging and testing capacity to fill increasing orders from Nvidia and Google. The capacity expansion will reportedly be at the IC packaging and testing plant in Longtan Science Park (purchased from Qualcomm in 2014) where InFO packaging is currently manufactured. TSMC has not confirmed this expansion.

Reportedly, increasing orders from Nvidia and Google for high-end packaging and testing of their AI Chips has fully occupied TSMCâ€™s existing CoWoS process capacity, driving the company to expand.

Digitimes also reports that TSMCâ€™s integrated fan-out (InFO) wafer-level packaging technology will enter its 2nd generation, and be used for their 7nm FinFET process technology. Digitimes notes that this makes it unlikely that Samsung will be able to regain AP orders for Appleâ€™s iPhone, since InFO makes TSMCâ€™s 7nm FinFET technology more competitive than Samsungâ€™s. [link]

Reuters reports that Samsung plans to triple the market share of its contract chip manufacturing business within the next five years. [link] E.S. Jung, executive VP of the foundry division, told Reuters that they want a 25 percent market share (would be #2 in market share) within five years and will seek to attract smaller customers in addition to big-name clients to fuel the growth.

They finally announced the spin off its foundry operation from the System LSI division to create an independent business unit this past May. This will change Samsungâ€™s current organization consisting of memory and system LSI into three entities including the foundry business.[link] The current foundry business is estimated to be ~ a $4.75B operation.

Samsung says it will start manufacturing 7nm chips using EUV litho tech in the second half of 2018. 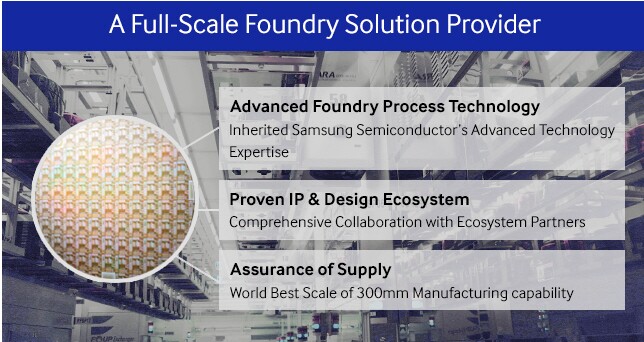 IFTLE has discussed for years that Samsung, if they ever chose to, could become the number 2 foundry supplier in the worldâ€¦well, now they choose to. This is probably bad news for GlobalFoundries and UMC. The question now becomes will Intel do the same. Intel, in the past few years, has put their â€śtoe in the waterâ€ť but has never really committed to a foundry business. Will this move by Samsung force their hand?