IC Insights revised its outlook for total semiconductor industry capital spending and presented its forecast of semiconductor capex spending for individual companies in its November Update to The McClean Report 2018, which was released earlier this month.

Samsung is expected to have the largest capex budget of any IC supplier again in 2018. ¬ÝAfter spending $24.2 billion for semiconductor capex in 2017, IC Insights forecasts that Samsung‚Äôs spending will edge slightly downward, but remain at a very strong level of $22.6 billion in 2018 (Figure 1). ¬ÝIf it comes in at this amount, Samsung‚Äôs two-year semiconductor capital spending will be an astounding $46.8 billion. 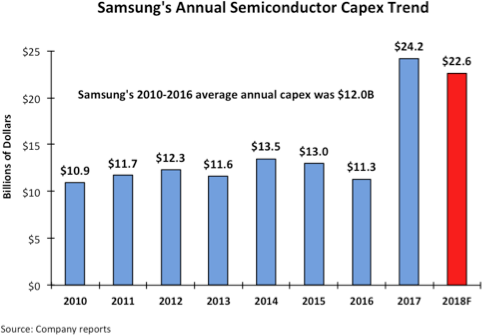 As seen in Figure 1, Samsung‚Äôs semiconductor capital outlays from 2010, the first year the company spent more than $10 billion in semiconductor capex, through 2016 averaged $12.0 billion per year. However, after spending $11.3 billion in 2016, the company more than doubled its 2017 capex budget. The fact that Samsung‚Äôs continued its strong capex spending in 2018 is just as impressive.

IC Insights believes that Samsung‚Äôs massive spending outlays in 2017 and 2018 will have repercussions far into the future. ¬ÝOne effect that has already begun is a period of overcapacity in the 3D NAND flash market. ¬ÝThis overcapacity situation is due not only to Samsung‚Äôs huge spending for 3D NAND flash, but also from spending by competitors (e.g., SK Hynix, Micron, Toshiba, Intel, etc.) that attempt to keep pace in this market segment.

With the DRAM and NAND flash memory markets showing strong growth through the first three quarters of 2018, SK Hynix ramped up its capital spending this year. ¬ÝIn 1Q18, SK Hynix said that it intended to increase its capex spending by ‚Äúat least 30%‚Äù this year. In the November Update, IC Insights forecasts that SK Hynix will see a 58% surge in its semi capex spending. ¬ÝThe increased spending by SK Hynix this year is focused primarily on bringing new capacity online at two of its large memory fabs‚ÄîM15, a 3D NAND flash fab in Cheongju, South Korea, and the expansion of its huge DRAM fab in Wuxi, China. The Cheongju fab is being pushed to open before the end of this year. ¬ÝThe Wuxi fab is also targeted to open by the end of this year, a few months earlier than its original start date of early 2019. 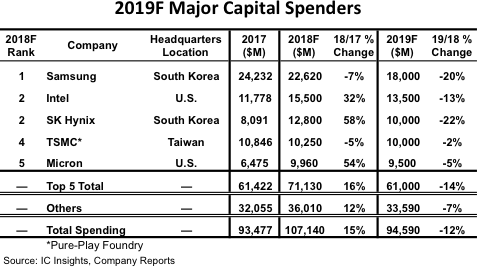 Given that the current softness in the memory market is expected to extend into at least the first half of next year, the combined capital spending by the three largest memory suppliers‚ÄîSamsung, SK Hynix, and Micron‚Äîis forecast to drop from $45.4 billion in 2018 to $37.5 billion in 2019, a decline of 17%.

In total, the top five spenders, which are expected to represent 66% of total outlays this year, are forecast to cut their capital spending by 14% in 2019 with the remaining semiconductor industry companies registering a 7% decline.