As I reported previously, the challenge is huge: one has to have the ability to detect one bad tumor cell in 5 billion blood cells. This equate to a requirement to detect 20 million cells per second.

ŌĆ£We all know that cancer is one of the most severe illnesses, creating a tremendous burden on the patients, on families and on society,ŌĆØ Van den hove said. Cancer spreads throughout our body through circulating tumor cells that originate from the primary tumors, and create secondary tumors. Usually those are the most fatal ones. ŌĆ£If we can develop a system that can detect those circulating tumor cells in a very early phase, we develop an early warning system for cancer,ŌĆØ he added.

Today, single cell analysis requires a lot of manual operations, sophisticated (and expensive) tools that require a lot of time to generate the results. Very often those results are not accurate enough or not sensitive enough. ŌĆ£What we actually need is a much more engineering type approach where we start from the clinical samples directly, and one that is much more automated. At imec, we are developing a high content, high throughput cell sorter, which is much more compact than any cell sorter ever made. We have demonstrated the proof of principle of operation of such a cell sorter,ŌĆØ Van den hove said.

HereŌĆÖs how it works: When a blood sample is loaded into the system, the cells flow in via the main microfluidic channel. The sample contains a whole range of cells. Several types of white blood cells, red blood cells, platelets, and even maybe some rare blood cells, such as circulating tumor cells. The microfluidic channel is about 30 microns wide, about the size of a single cell. Conditioned light illuminates the cells and results in fringe patterns that are recorded by the CMOS image sensor. These fringe patterns contain information on the 3D structure of the cell. The recorded holograms are then reconstructed into 2D images that are used to distinguish between the different types of cells based on cell size and nuclear morphology. These calculations, managed by an ASIC, need to be performed very quickly before the cells arrive at the microheaters further down the channel. The microheaters located at the crossings of outlets, generate small and short-lived steam bubbles that gently but quickly push single cells to a particular outlet. While the red bloods cells just go straight on, the while blood cells are brought to the lower outlet and the tumor cells are pushed in the upper outlet. The sorted cells can then be further analyzed downstream. For instance, by extracting specific molecular information. After sorting, high resolution 2D or even 3D imaging of each single cell can be consulted for further visual analysis. 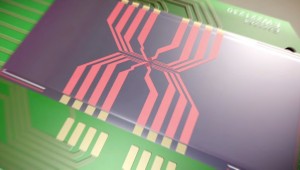 Imec has so far demonstrated all the building blocks of this technology and demonstrated proof of principle with a single channel. The next step is to build thousands of channels on a single chip. ŌĆ£With silicon technology, we can very easily integrate thousands of those channels on one chip and in this way, realize the enormous sensitivity that is needed in order to detect these bad tumor cells in a billion cells. The system weŌĆÖre developing will be able to process more than 20 million images a second. This kind of tool will bring one to bring this kind of analysis from a very sophisticated lab to the side of our bed and provide much better accuracy,ŌĆØ Van den hove said. 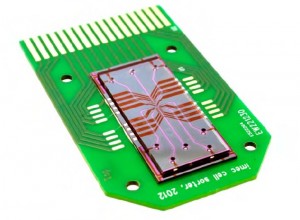