Dead reckoning, or, where am I, exactly?

Dead reckoning is the process of calculating oneâ€™s current position by using a previously determined position, and advancing that position based upon known speeds over a time slice. As a highly useful process, dead reckoning is the basis for inertial navigation systems in aerospace navigation and missile guidance, not to mention your smartphone.

Todayâ€™s best-in-class MEMS gyroscopes can offer 30-50 cm resolution (this is the yaw rate drift) over a distance of 200 mâ€”a typical tunnel length where a GPS signal is lost. For semi-autonomous (L3) or autonomous (L4, L5), the locational accuracy is well below 10 centimeters; thatâ€™s an accuracy usually reserved for high-end industrial or aerospace gyroscopes with a raw bias instability ranging from 1Â°/h and down to 0.01Â°/h. These heavy-duty gyros command prices from $100s up to $1000s. 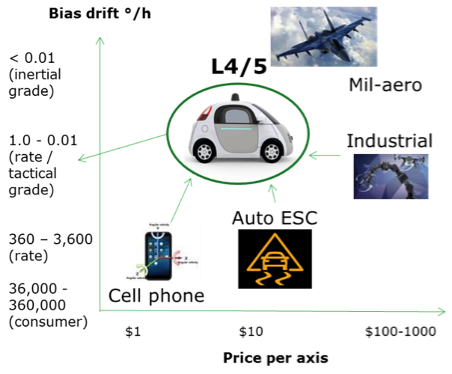 This poses an interesting potential opportunity for both industrial-performance MEMS-based gyroscope sensor-makers, such as Silicon Sensing Systems, Analog Devices, Murata, Epson Toyocom and TDK InvenSense, and for broader-based sensor component-makers such as Bosch, Panasonic, STMicroelectronics, and TDK (InvenSense and Tronics).

While MEMS can master performance, size and low weight, cost remains the challenge. The fail-operational mode requirement for autonomous driving will accommodate higher prices, at least in the beginning, probably in the $100+ range at first, even for the relatively low volumes of self-driving cars anticipated by 2030. Nonetheless, automotive volumes are very attractive compared to industrial applications and offer a lucrative future market for dead-reckoning sensors.

Your cockpit will get smarter

Automakers are banking on the idea that people like to control their own physical environment. Interiors already feature force and pressure sensors that provide more personalized seating experiences and advanced two-stage airbags for improved safety. In some vehicles, automakers are using pairs of MEMS microphones for noise reduction and image or MEMS infrared sensors for detection of driver presence. Eventually, we might see gas sensors that monitor in-cabin CO2 levels, triggering a warning when they detect dangerous levels that could cause drowsiness. These smart sensors would then â€śtellâ€ť the driver to open the window or activate an air-scrubbing system in a more complex solution. While todayâ€™s CO2 sensors are still relatively expensive, we may see them designed-in as lower-cost versions come to market.

Future cockpits will need to go beyond such concepts in the lead-up to fully automated driving. Seats could contain sensitive acceleration sensors that measure heart and respiration rates as well as body movement and activity. Other devices could monitor body humidity and temperature.

We need look no further than Murata, a supplier initially targeting hospital beds with a MEMS accelerometer as a replacement for pulse oximeters. That same Murata accelerometer could be placed potentially in a car seat to detect heart rate. Itâ€™s not the only way to do this: another sensing approach for heart-rate measurement comprises millimeter wave radiation, a method that can even look through objects such as books and magazines.

Augmenting sensor-based body monitoring, automotive designers will use cameras to fuse information such as gaze direction, rate of blinking and eye closure, head tilt, and seat data with data gathered by sensors to provide valuable information on the driverâ€™s physical condition, awareness and even mood.

Faureciaâ€™s Active Wellness conceptâ€”unveiled at the 2016 Paris Motor Showâ€”proves that this technology might be coming sooner than we think. Active Wellnesscollects and analyzes biological data and stores the driverâ€™s behavior and preferences. This prototype provides data to predict driver comfort based on physical condition, time of day, and traveling conditions, as well as car operating modes: L3, L4 or L5. Other features such as event-triggered massage, seat ventilation and even changes in ambient lighting or audio environment are possible. 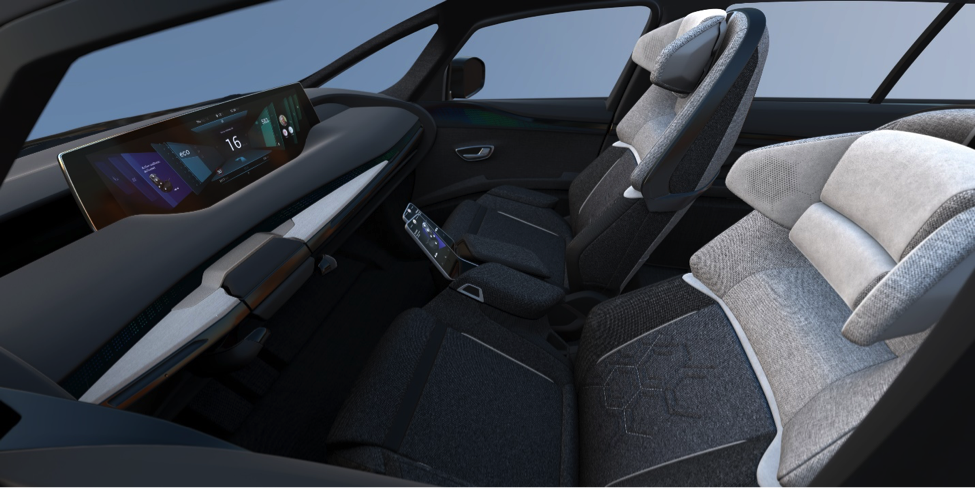 Meanwhile, there are other commercial expressions of more advanced HMI as well as plenty of prototypes. Visteonâ€™s Horizon cockpit can use voice activation and hand gestures to open and adjust HVAC. Capacitive sensors are already widely used for touch applications, and touchless possibilities range from simple infrared diodes for proximity measurement to sophisticated 3D time-of-flight measurements for gesture control.

Clearly, automotive designers will have a lot more freedom with HMI in the cabin space, providing a level of differentiation that manufacturers think customers will appreciateâ€”and for which they will pay a premium.

Researchers are investigating ways to solve the issue of high-functionality vehicles containing myriad sensing inputs, i.e., when we have so many sensing inputs, designers must address wiring complexity and unwanted harness weight. Faurecia, for example, is considering ways to convert wood, aluminum, fabric or plastic into smart surfaces that can be functionalized via touch-sensitive capacitive switches integrated into the surface. These smart surfaces could reduce the explosion of sensing inputs, thereby diminishing wiring complexity. With availability from 2020, Faureciaâ€™s solutions are approaching the market soon.

Beyond functionalized switches, flexible electronics and wireless power sources, and even energy harvesting (to mitigate power sources), could provide some answers. Indeed, recent research has shown that graphene-based Hall-effect devices can be embedded in large-area flexible Kapton films, and eventually integrated into panels. OEMs such as Jaguar Land Rover are interested in such approaches to address the downsides of electronics and sensor proliferation, especially in luxury vehicles. While smart surfaces would represent a big change in sensor packaging and a disruption in current semiconductor processes, they remain a long way from commercial introduction.

By 2030 or thereabouts, fully autonomous cars that detect our mood, vital signs and activity level could well be available. Cabins could signal us to open the window if CO2 levels become dangerous. HVAC systems could increase seat ventilation or turn up the air conditioning (or the heat) based on our body temperature. Feeling too hot or too cold in the cabin could become a thing of the past, at least for the driver, whose comfort level is the most important! We could feasibly feel more comfortable in the car than in our office, our home or at the movies. Perhaps our car will become our office, our entertainment center and our home away from home as we take long road trips with the family, without a single passenger uttering, â€śAre we there yet?â€ť 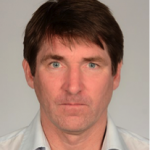 Richard Dixon, Ph.D., is a senior principal analyst for MEMS research and author of more than 50 MEMS-related consulting and market research studies. He is a renowned expert on automotive MEMS and magnetic sensors used in safety, powertrain and body applications. Along with supporting the overall activities of the MEMS and sensors group, his responsibilities include the development of databases that forecast the markets for more than 20 types of silicon-based sensors in more than 100 automotive applications. In addition, he has supported organizations with future scenarios for sensors in cars and has supported many custom projects for companies in the automotive supply chain.

In his prior post at Wicht Technologie Consulting (WTC), Dixon was a senior MEMS analyst where he led research on physical sensors and was the co-author of the NEXUS Task Force Report for MEMS and Microsystems 2005-2009. He has also led commercialization and road-mapping activities on European Commission-funded technology projects, including detailed MEMS chip cost analysis studies.

Dixon worked previously as a journalist in the compound semiconductor industry and has five years of experience as a technology transfer professional at RTI International, where he provided business and market intelligence for early-stage technologies.

Dixon graduated from University of Greenwich with a degree in materials science and earned a doctorate from Surrey University in semiconductor characterization. He speaks English and German.