Soraa, a developer of GaN on GaN LED technology, announced today that one of its founders, Dr. Shuji Nakamura, has been awarded the 2014 Nobel Prize in Physics. Recognizing that Nakamura‚Äôs invention, the blue light emitting diode (LED), represents a critical advancement in LED lighting, the Nobel committee explained the innovation ‚Äúhas enabled bright and energy-saving white light sources.‚Äù

‚ÄúI am very honored to receive the Nobel Prize from The Royal Swedish Academy of Science for my invention of the blue LED,‚Äù said Nakamura. ‚ÄúIt is very satisfying to see that my dream of LED lighting has become a reality. I hope that energy-efficient LED light bulbs will help reduce energy use and lower the cost of lighting worldwide, and that is why we founded Soraa.‚Äù 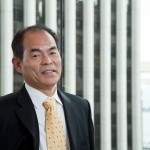 In 2007, Dr. Shuji Nakamura, along with pioneering professors Dr. Steven DenBaars and Dr. James Speck, came together and made a bet on an LED technology platform completely different than current industry practice, a technology most industry experts at the time considered to be impossible to execute.

‚ÄúWe knew that our GaN on GaN LED technology would be the future of lighting and Soraa has made this a reality,‚Äù added Nakamura.

‚ÄúShuji is simply brilliant and well deserving of this honor. Largely as a result of his work, Soraa has been able to push the boundaries of what is possible in high performance LED lighting,‚Äù said Jeff Parker, CEO of Soraa. ‚ÄúSoraa‚Äôs GaN on GaN LED lamps are now regarded as the best in the world, with quality of light that far surpasses any other LED product.‚Äù