At the recent IMAPS conference, Samsung electro-mechanics compared their Plated Mold Via Technology (PMV) to the well known Amkor Through Mold ViaÂ  (TMV) technology. The two process flows are compared below.

Samsung EM describes the driving force for this new technology as the added adhesion that they get by replacing the solder TMV fill with copper in the PMV.

Seeking input from Glenn Rinne of Amkor, IFTLE found out that Amkor has run both processes and seen that the laser formed vias have both cavities and protrusions in the via walls due to the filler in the mold compound. The cavities serve as a â€śroughnessâ€ť which anchors the solder fill and the filler particles protruding into the vias actually shadow the deposition of seed layer when copper is plated into the holes so they concluded that the solder, which is â€śconductive enoughâ€ť actually shows better adhesion and is a cheaper process.

TSMC is purchasing a plant in Longtan, Taiwan from Qualcomm for $85MM and turning it into a facility devoted to the development of the advanced integrated fan-out wafer-level packaging (InFO-WLP) technology. TSMC could initiate manufacturing as early as 2016 on 16nm chips, but HVM date will depend on â€ścustomer demandâ€ť [link]

TSMC and Samsung battle for Apple and Qualcomm Orders

It is reported that both Apple and Qualcomm will likely buy a larger proportion of 14 nanometer smartphone chips from Samsung rather than TSMC beginning in the second half of 2015 [link].

For those of you struggling with all the new memory architectures that have been announced, I recommend the recent article by Yole Developpement which details announcements by Hynix, Samsung, Micron and Tezzaron [link]. With the recent Samsung announcement of mass production of 64 GB DDR4 DIMMs that use TSV technology for enterprise servers and cloud-based applications, all three of the major DRAM memory manufactures, Samsung, Hynix and Micron, have now announced the commercialization of TSV based memory architectures. 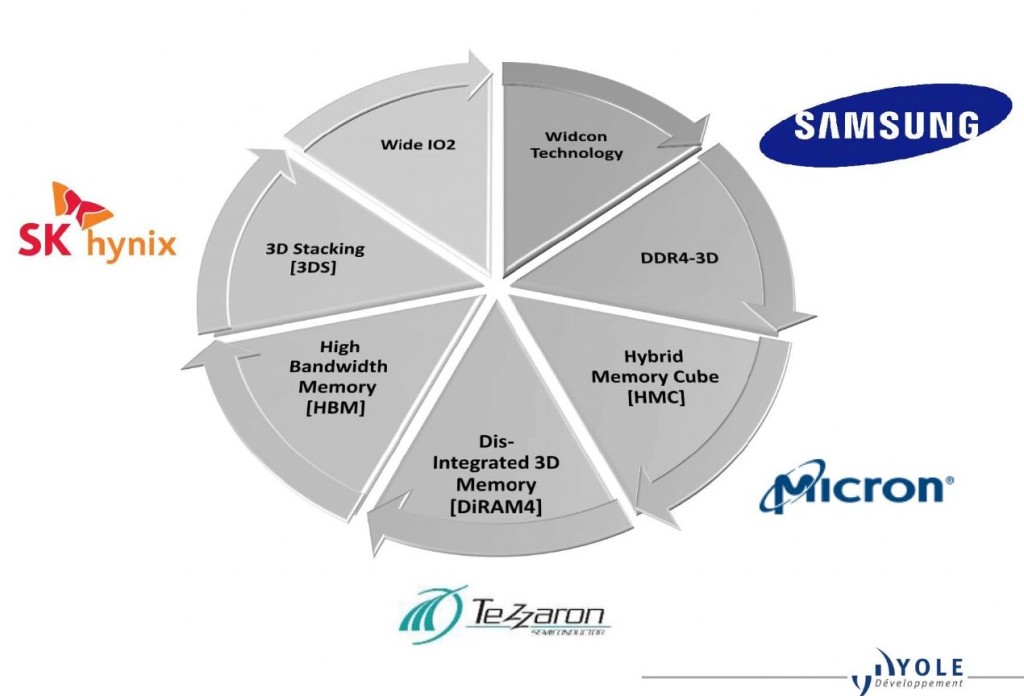 Different applications will have different requirements in terms of bandwidth, power consumption, and footprint. As we move into 2015 several industry segments have announced applications using the new memory stacks. Intel recently announced that their Xenon Phi processor â€śKnights Landing,â€ť which will debut in 2015 will use 16GB of Micron HMC stacked DRAM on-package, providing up to 500GB/sec of memory bandwidth for high performance computing applications.Â  AMD and Nvidia have also announced the use of HBM in their next generation graphics modules like the Nvidia Pascal due out in 2016.