Downsizing and thinning all the electronic parts has always been a trend in our modern era. However, the nanoscience and nanotechnologies were still science fiction in the 60ŌĆÖs and the word nanotechnology was used for the first time in 1974. At the same time, the first atomic force microscopes (AFM) and scanning acoustic microscopes (SAM) were developed. Today nanotechnologies represent huge investments –┬Ā even from governments – and a global market of several thousand of billions of euros.

Non-destructive testing at the nanometric scale is the purpose here. Ultrasounds are widely used in the aeronautics industry or during medical echography. The spatial resolution reached in that case is around the millimeter which is a million time too large when we speak of nanotechnologies.

SAM systems benefit from a higher definition thanks to MHz/GHz ultrasounds, the smallest axial resolution found on the market is below the micron. 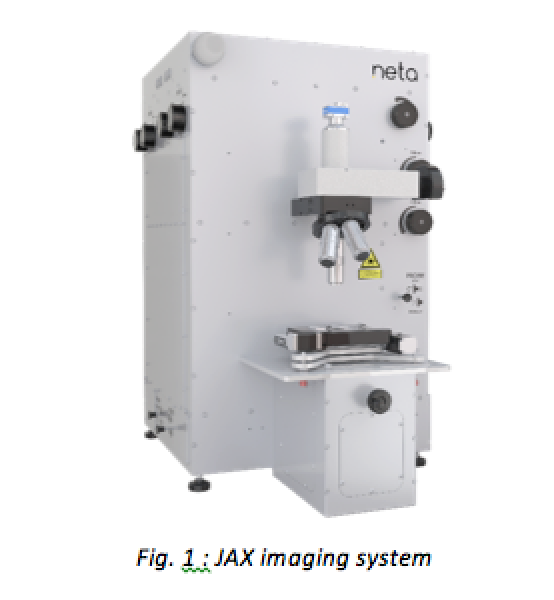 The nanometric world requires another 2 to 3 orders of magnitude below and it can only be reached thanks to THz ultrasounds. These frequencies cannot be generated with standard transductors, thatŌĆÖs why the ASynchronous OPtical Sampling (ASOPS) systems are equipped with ultrafast lasers.

This complex technology is now available on the market in a compact instrument. The JAX is the first industrial imaging ASOPS system (Fig. 1).

When the laser hits the surface, the most part of the energy is absorbed by the first layers of atoms and converted into heat without damaging the sample (Fig. 2), leading to transient thermoelastic expansion and ultrasound emission. 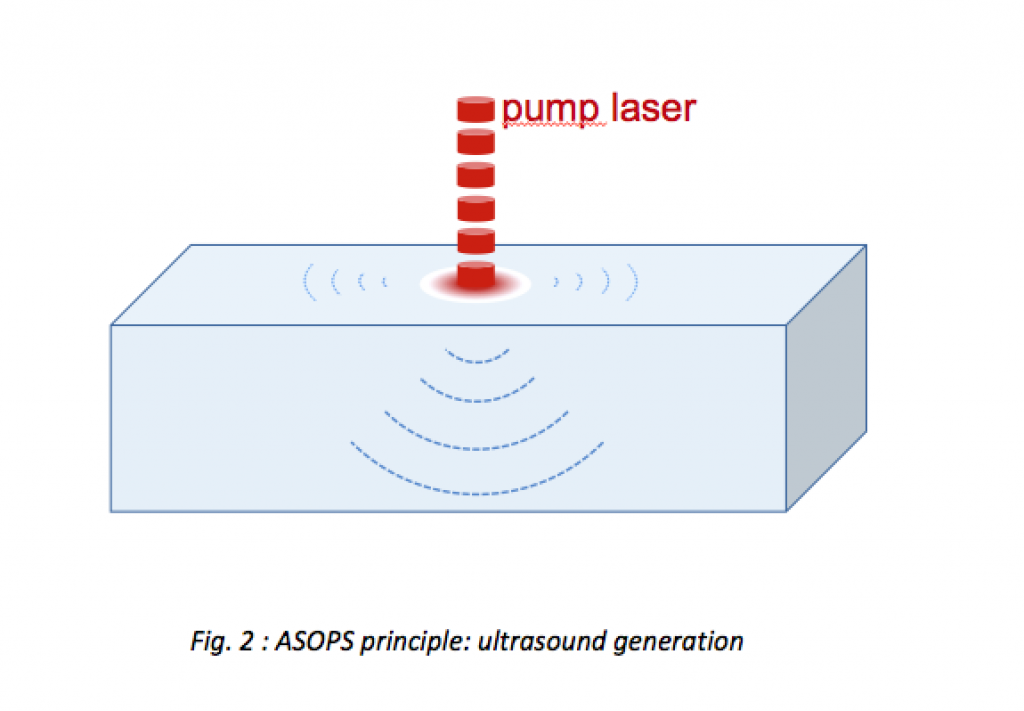 The choice of the probe is also important to keep the temporal and the spatial resolution as low as possible, thatŌĆÖs why another ultrafast laser is used as a probe (Fig 3.).

The ultrasound is propagating a few nanometers per picosecond through the thin film and at some point will bounce back partially or completely to come back to the surface when meeting a different medium.

The probe laser is focused at the surface, when the ultrasound hits back the surface, the reflectivity fluctuates locally over time. 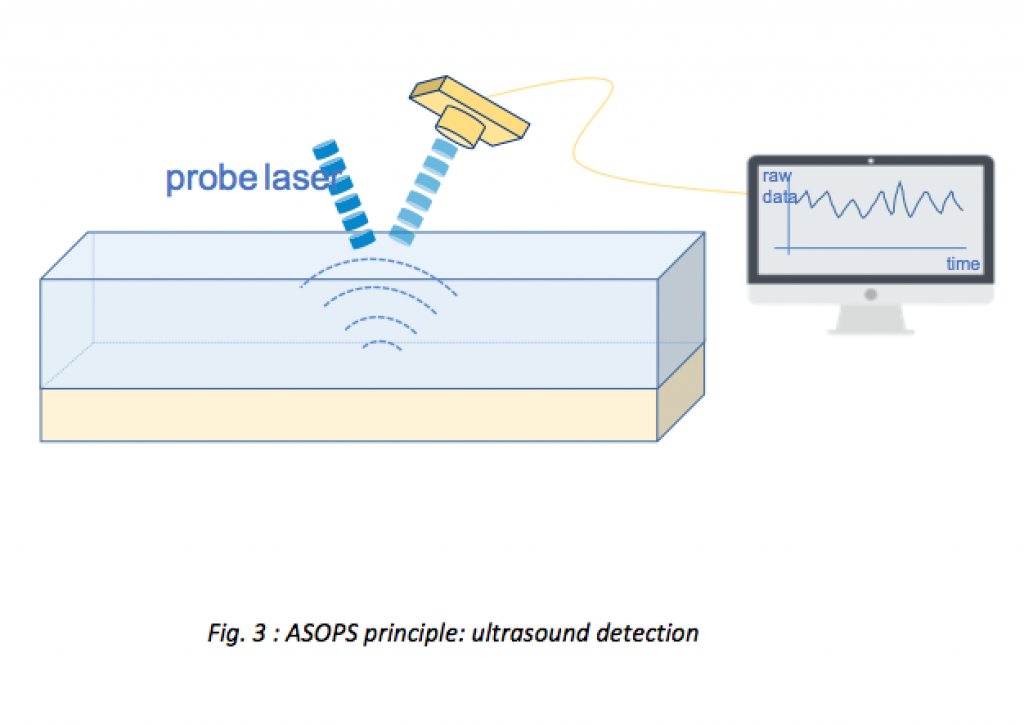 The variation of reflectivity is detected and stored into the computer as a raw data.

The technique is often called picosecond ultrasonics, it has been developed at Brown University in the USA by Humphrey Maris in the mid 80ŌĆÖs.

The ASOPS is not the only kind of technology able to perform picosecond ultrasonics, but itŌĆÖs the latest evolution and the fastest to perform a full measurement. The trick here is to slightly shift the frequency of the probe laser compared to the pumpŌĆÖs one (Fig. 4). Both lasers are synchronized by a separate electronical unit. The probe arrives slightly after the pump and this delay is extending with time until the whole sampling is over.

The elastic answer of the thin film to a pump excitation is too fast to be measured in real time. You have to artificially extend time and reconstruct the signal of the probe. 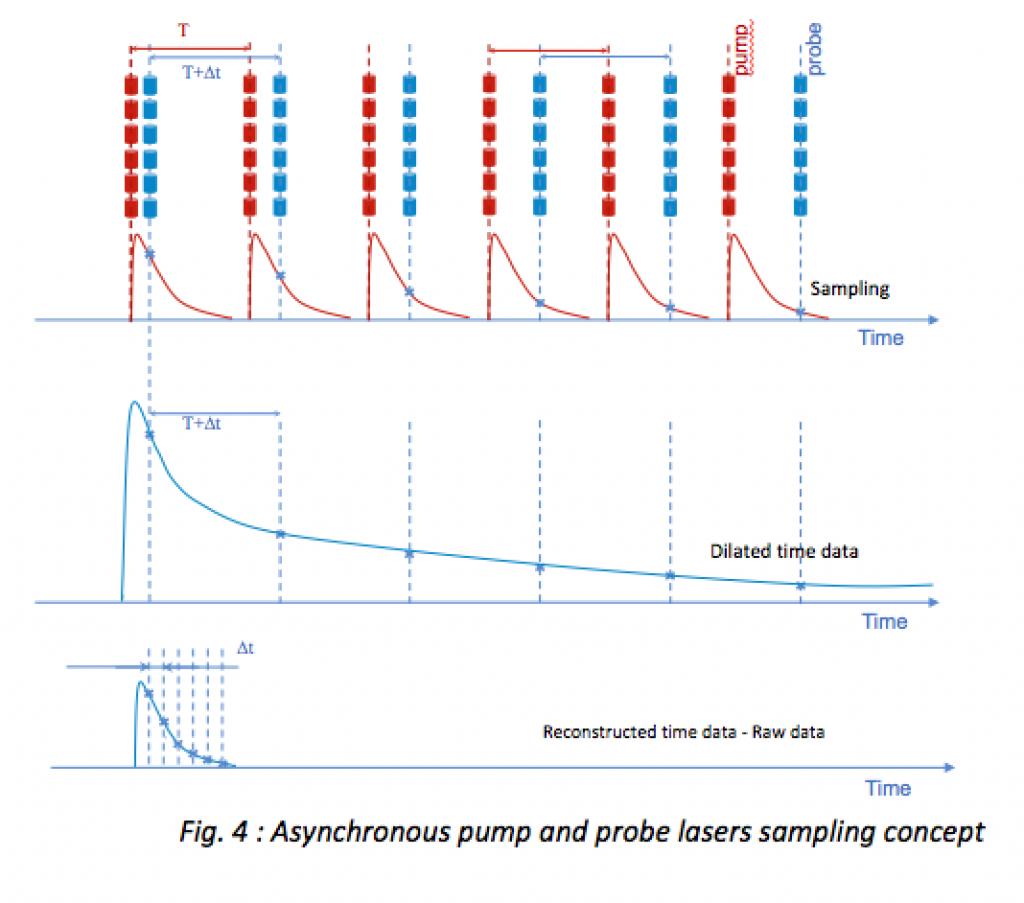 The measure described above is for one single point. With a more standard instrument able to perform picosecond ultrasonics, it would take several minutes. Here with the ASOPS, the measure takes less than a second. It means that by simply scanning point by point all over the surface (Fig. 5), you will get a full map of the studied mechanical parameter in minutes. 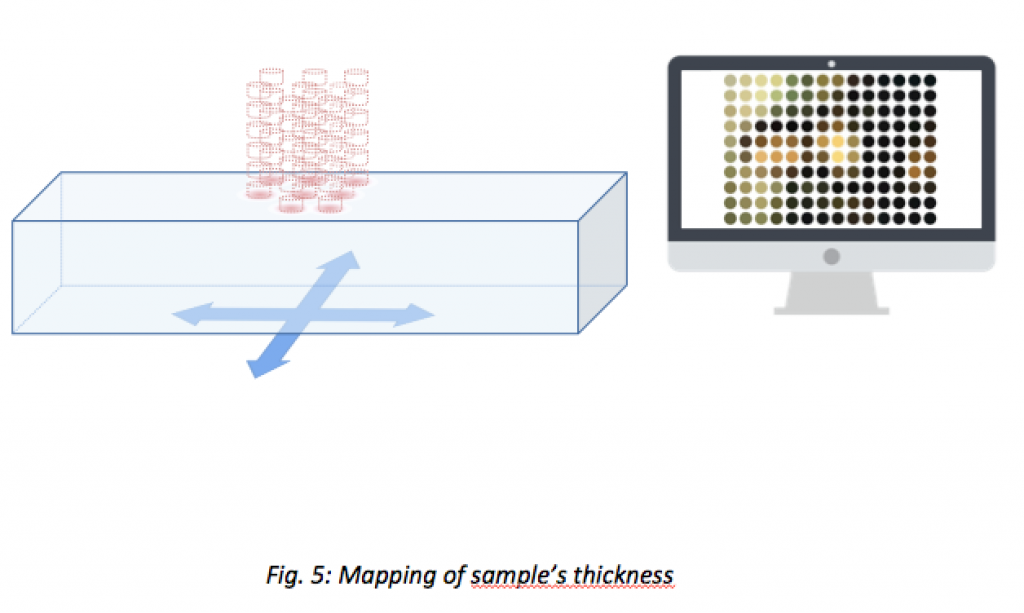 For instance if your interest is in the thickness of a thin film, you can easily retrieve an accurate value by measuring the time between two echoes of the ultrasound at the surface of the sample (Fig. 6). 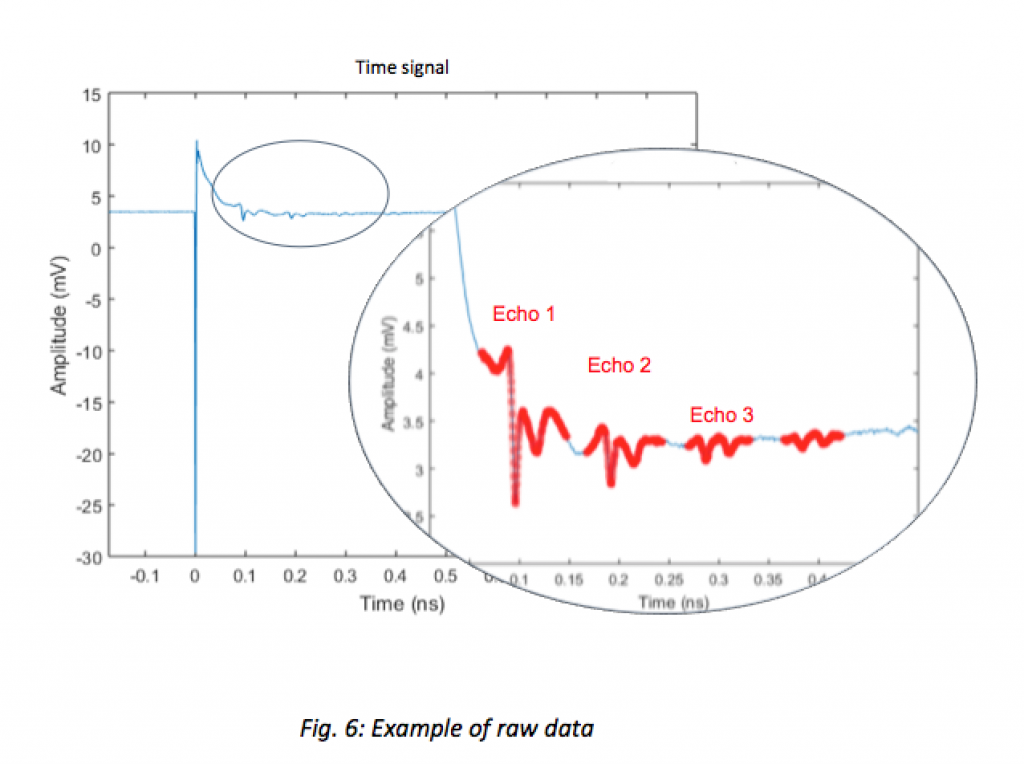 Until recently, the kind of setup required to make these measurement was found in a optical lab with a large honeycomb table full of mirrors and lenses. Even though the results are respectable, the time to install and repeatability are often the main issue.

Hopefully the technology is now accessible for non-specialists who just want to focus on measuring the mechanical properties of their samples and not to take care of all the optical part. The industrialization of such an innovative and complex device is giving an easy access to new information.

Since a punctual measurement takes a few milliseconds, it is easily feasible to measure all over the surface of the sample and get a full mapping of the thickness.

In the examplebelow (Fig. 7), the sample consists of a 500 ┬Ąm silicon substrate and 255 nm sputtered tungsten single layer. The scanned surface is approximately 1.6 mm x 1.6 mm and the lateral resolution in X-Y is 50 ┬Ąm, 999 points in total. 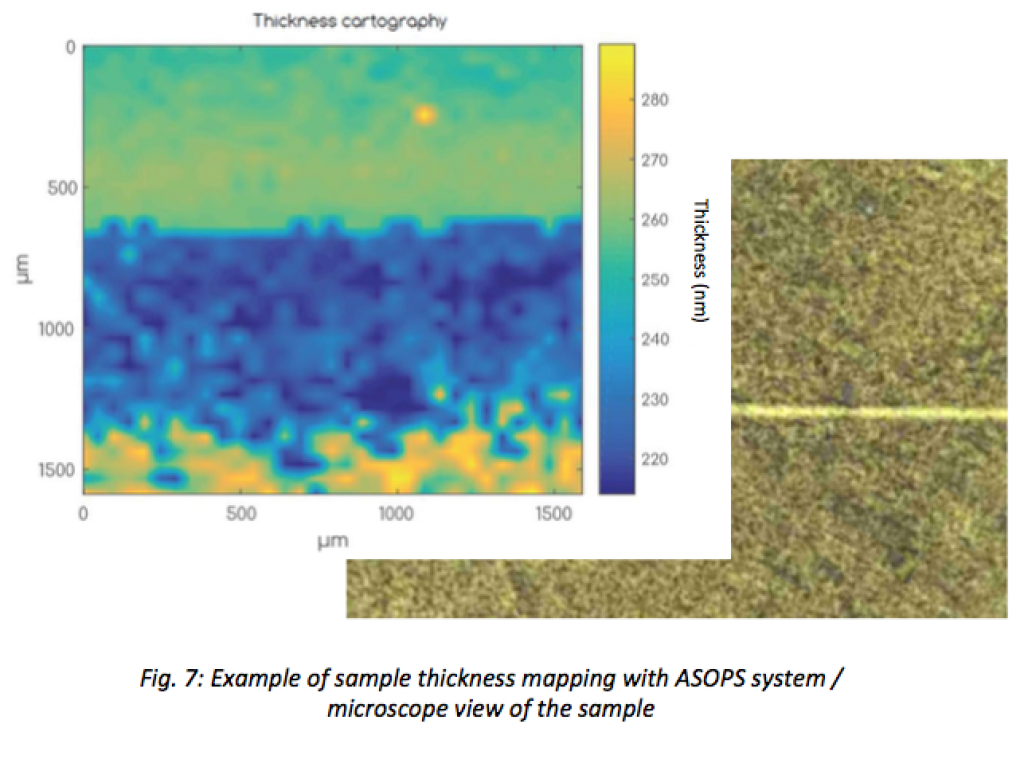 A large scratch is being highlighted at the surface but the average thickness remains in the range of 250 nm. The total time of measurement is less than 10 minutes, which is comparable to a single point measurement with one laser and a mechanical delay line (homodyne system).

Until now, the industry offer for production management was only homodyne instruments performing picosecond ultrasonics measurements, reducing the full scan of the surface to a very few points checked only over a full wafer.

We just saw that single layer thin film thickness measurement is pretty straight forward. If you are dealing with more than one layer the raw data is much more complex to read. However, it is possible to model the sample and to compare the simulated signal to the actual measure with an incredible fit.

When you chat with several experts of thin films, they will all agree to tell you that:

In the industry, thickness and adhesion are the main concern at all steps of the manufacturing process, whether you are working in the display or the semiconductor field. The picosecond ultrasonics technique is already used in-line for wafer inspection, which shows its maturity and yet confidentiality.

The standard procedures for adhesion measurement are applicable only on flat and large samples, and they are destructive. When it comes to 3D samples and if you want to check the adhesion on a very small surface, the laser is the only solution. Adhesion can now be verified inline all over the sample during every step of the manufacturing process.

Now the academic world has different concerns and goes deeper and deeper in the understanding of the material behavior at the atomic scale.

The ASOPS system can go beyond the picosecond ultrasonics ŌĆō which is already a great source of information if we stick to thickness and adhesion –┬Ā and get even more from the raw data such as thermal information or critical mechanical parameters.

Thermal conductivity is the parameter representing the heat conducting capability of a material.

Thin films, superlattices, graphene, and all related materials are of broad technological interest for applications including transistors, memory, optoelectronic devices, MEMS, photovoltaics ┬Āand more. Thermal performance is a key consideration in many of these applications, motivating efforts to measure the thermal conductivity of these films. The thermal conductivity of thin film materials is usually smaller than that of their bulk counterparts, sometimes dramatically so.

Using pulsed lasers is one of the many possibilities to measure the thermal conductivity of a thin material. The time-domain thermoreflectance (TDTR) is a method by which the thermal properties of a material can be measured. It is even more suitable for thin films materials, which have properties that vary greatly when compared to the same materials in bulk.

The temperature increase due to the laser can be written as follows: 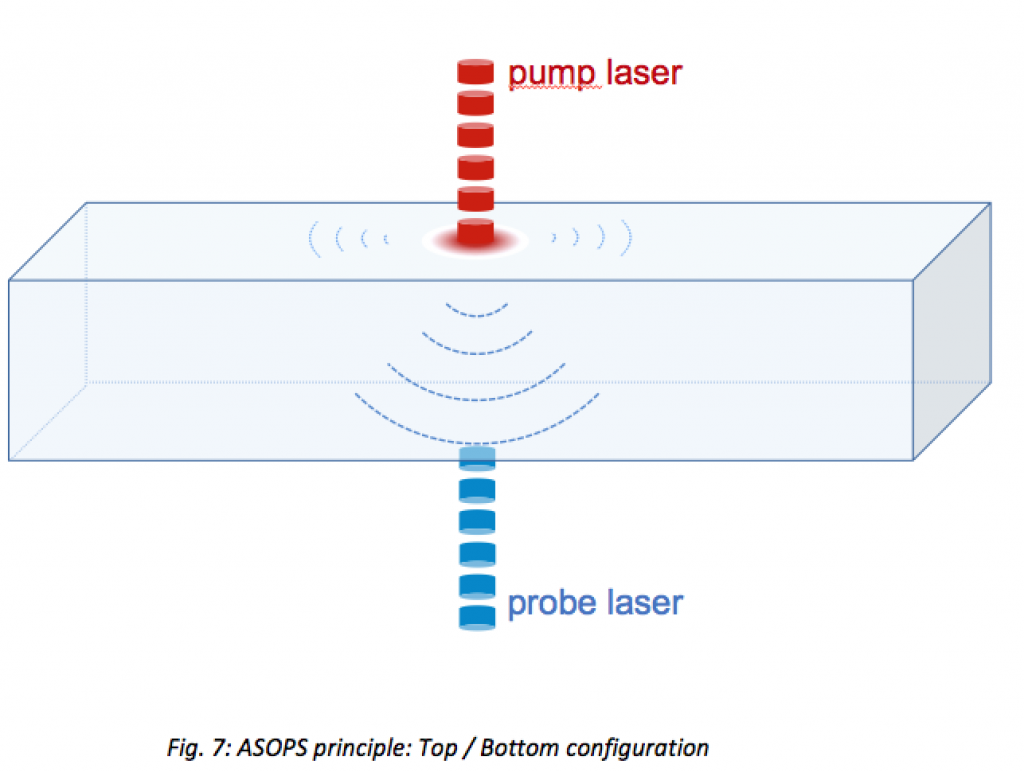 The voltage measured by the photodetector is proportional to the variation of R, it is possible then to deduce the thermal conductivity.

In some configuration, it can be useful to shoot the probe on the bottom of the sample (Fig. 7) or vice versa in order to get more accurate signal from one side or the other of the sample.

When the pump laser hits the surface, the ultrasound generated is actually made of two distinct waves modes, one propagating in the bulk, which is called longitudinal (see Fig. 1), one traveling along the surface, itŌĆÖs called the Rayleigh mode.

In the industry the detection of surface acoustic wave (SAW) is used to detect and characterize cracks.

The propagation velocity of the surface waves, c, in a homogeneous isotropic medium is related to:

When using an industrial ASOPS system to measure and image the SAW, the pump laser is fixed (Fig. 8) and always hitting the same spot.

The probe is measuring its signal around the pump laser thanks to a scanner installed in the instrument. 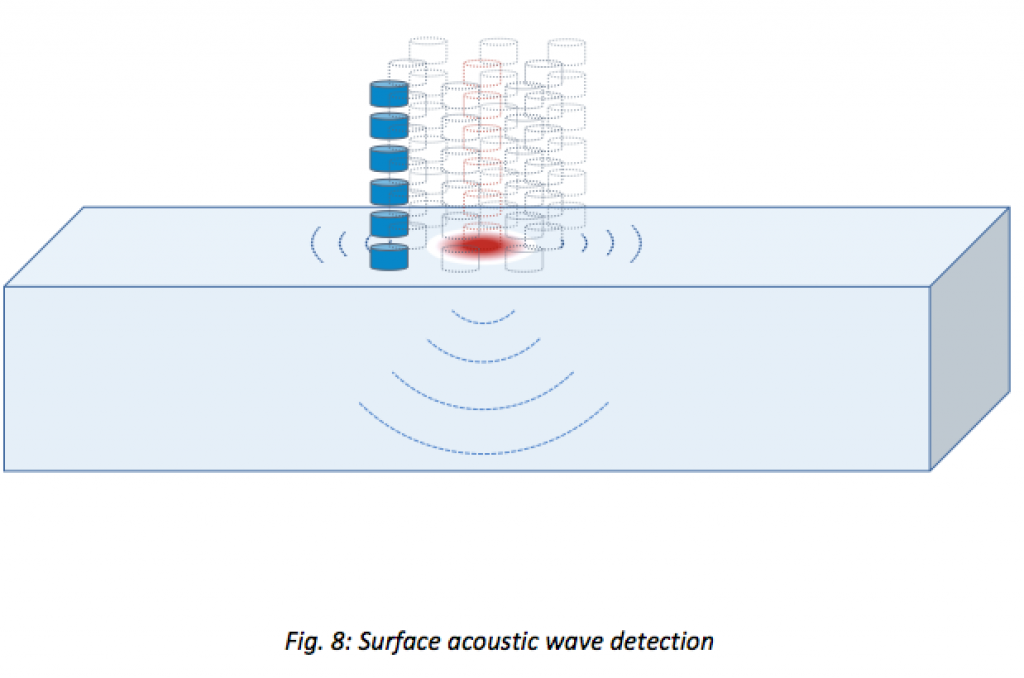 We had a quick overview of some applications and parameters that can be measured with an industrial┬Ā ASOPS imaging system. Of course it was not exhaustive, we could think for instance of adding Brillouin scattering detection in transparent material and more.

Today, ASOPS technology is moving from the margin to the mainstream. The academic community already recognizes this non-destructive technology as truly operational and able to deliver reliable and accurate measurements. For industrial applications, ASOPS systems will most certainly begin to replace standard systems in the short term and to fill the gap of ultrasonic inspection at nanometric scale.

Besides it is easily nestable in the production line while some other instruments are meant to remain research devices because they require much more care, vacuum pumps, complex settings etc.

However, the industry is far from done exploiting the full range of capabilities offered by ASOPS systems, this versatile technology also continues to be developed and validated for a broad range of other critical applications. Indeed, ASOPS systems has already shown a great potential on biological cell research. We can expect new developments to be done in the future and see instruments help the early disease detection within the next few years.