The semiconductor industry has greatly benefited from the push to mobile technology, but what‚Äôs next? It could well be the Internet of Things (IoT), which includes smart homes, smart cars, smart TVs, wearable electronics and beacons. According to an analysis by Business Insider, The Internet of Things alone will surpass the PC, tablet and phone market combined by 2017, with a global internet device installed base of around 7,500,000,000 devices. 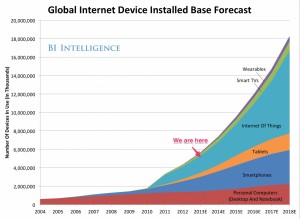 In a keynote talk at the Advanced Semiconductor Manufacturing Conference (ASMC), John Lin gave some insight into the technology challenges the IoT will create. John is the Vice President and General Manager of Operation of G450C Consortium. Prior to joining G450C, Dr. Lin was the Director of Manufacturing Technology Center in TSMC.

‚ÄúWhat is the next big thing?,‚Äù he asked? In 2014, after mobile computing, we believe it is the Internet of things. Many of the devices needed to connect to the internet will grow very fast. We need to prepare the technology for that.‚Äù John said the ultra-low power will be a primary concern. Processors, sensors and connectivity will also be key. ‚ÄúTo support this at TSMC, we will continue with our ultra-low power efforts and continue to support advanced nodes, from 28, 20, 16 to 10nm.‚Äù He also said the company will focus on ‚Äúspecial‚Äù technologies such as image sensor, embedded DRAMs, high-voltage power ICs, RF, analog, and embedded flash. ‚ÄúAll this will support all of the future Internet of Things,‚Äù he said.

The Business Insider report also notes that the wearables, connected car and tv markets will equal the tablet market by 2018. Smart appliances are already going mass market. More than 250,000 Nest thermostats, for example, have already shipped this year. Connected TVs are overtaking traditional TVs: A connection to the internet will become common in fully loaded cars. US regulators are slowly allowing more aerial drones. Also expect to see more ‚Äúbeacons‚Äù in retailer establishments, such as Apple‚Äôs iBeacons, which are used to communicate with shoppers in-store.

One thought on “The next big thing: IoT”