Two weeks ago, we posted about the TSMC 20nm product that we had in-house; now after waiting for a year sinceÂ Samsungâ€™s announcement of V-NAND production, we have that in the lab and can start to see what it looks like.

The vertical flash was firstÂ released in an enterprise solid-state driveÂ (SSD) last year, in 960 GB and 480 GB versions, but with no model number, so essentially for sampling only to established customers. Then in May this year they announced a second-generation V-NAND SSD, with a stack of 32 cell layers.

However, on July 1 at this yearâ€™s Samsung SSD Global Summit theyÂ unveiled the SSD 850 Pro, aimed at high-end PCs and workstations, and said to be available in July. Of course we immediately put out feelers and got some on pre-order. Â They showed up last week and we have the first few images.

First, though, letâ€™s think about what the changes are from the conventional planar NAND. Samsung posted a slickÂ videoÂ which gives a summary of the technology. The first thing to note is that we have gone from the ETOX floating-gate charge storage that we have seen in the last umpteen generations of flash, to charge-trap storage (CTF – Charge Trap Flash) in which the charge is stored on a silicon nitride layer (otherwise known as a SONOS cell – Si/SiO/SiN/SiO/Si).

The SONOS stack is then oriented vertically, using a polysilicon cylinder as the substrate silicon, and wrapping the other layers around the central cylinder.

The wordlines (control gates) become a horizontal layer, and the bitlines are connected to the top of the polySi cylinder; the select gates are formed by the top and bottom conductive layers [1]. Samsung describes the use of a tungsten replacement metal gate [1], and 24 wordline layers plus 2 dummy wordlines and two select gates for a total of 28 layers [2]. 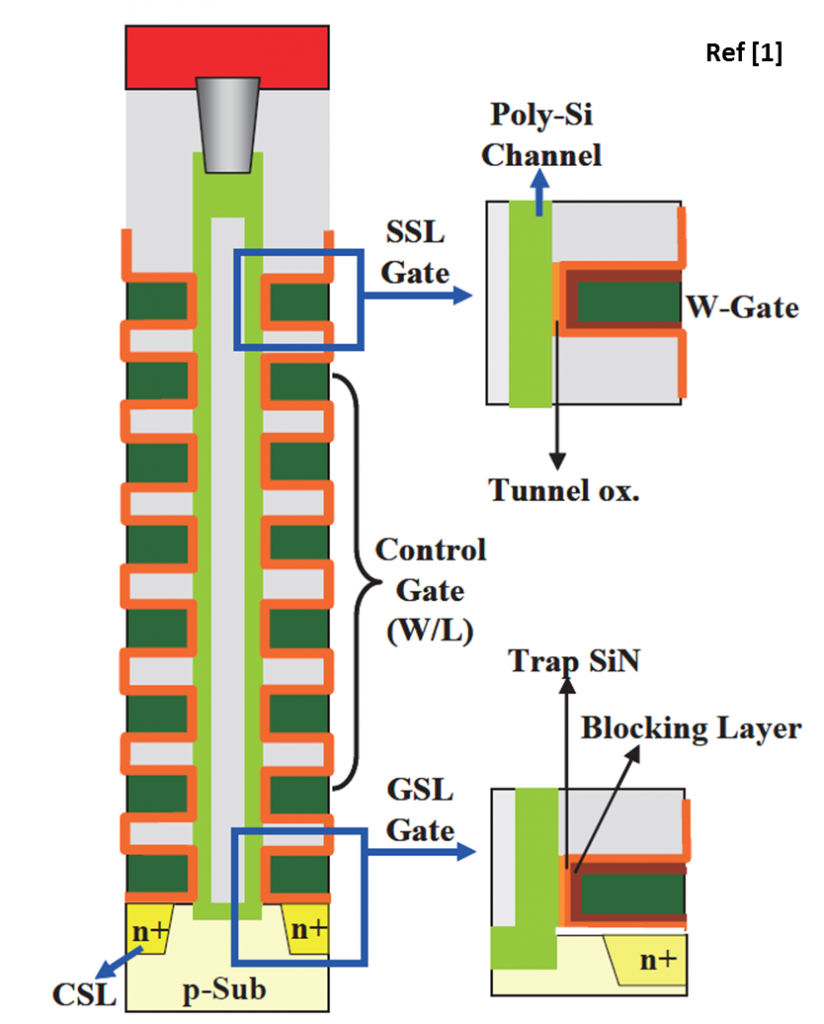 We also see in Fig.2 a “blocking layer” in between the metal gate and the SiN, which at least implies the use of a high-k dielectric instead of an oxide layer for the capacitative coupling layer, as used in their CTF parts from 2006.

One of the many challenges using a vertical stack such as the V-NAND is etching through a stack of many dissimilar layers, to etch the holes for the polySi cylinder channels, Â the slots through the stack to separate the wordlines, and the vias down to the wordlines (etching holes down to a staircase of extended wordlines). In fact, the whole stack is a big etching problem – see Fig.3. 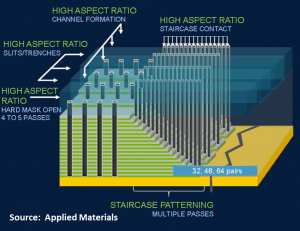 Now that we have the production part, Samsung have clearly solved those problems. Letâ€™s take a first look at whatâ€™s inside. Fig. 4 is a photo of the die, and Fig. 5 shows the die mark – the “A” on the end denoting the second-generation product. Interestingly, the “DG” in the part number normally denotes a 128-Gb die, but this part is actually ~86 Gb, since we have twelve flash dies in our 128-GB solid-state drive. 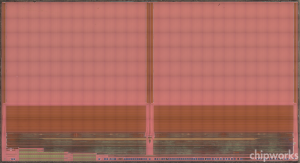 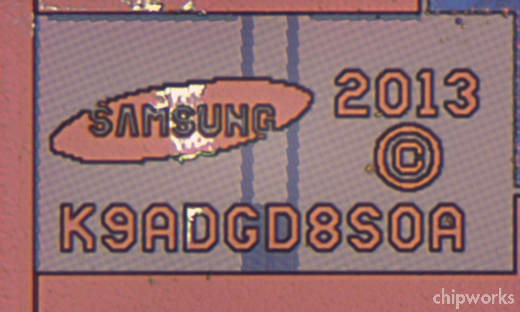 When we cross-section the chip, the staircase shown in Fig. 3 shows up nicely:

In this first shot, we donâ€™t appear to have sectioned through any of the vias to the wordline layers; the vertical features appear to be polySi cylinders drilled into the outer edges of the stack.Â If we look closer at the edge of the array, that does appear to be the case (Fig. 7). 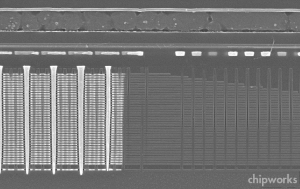 On the left side of the image we can see the array proper. SEM images can always be confusing, but it appears that the polySi bitline cylinders are staggered, and the slots between wordlines are filled with tungsten to contact the substrate for the lower select transistors. Fig. 8 shows things in a little more detail, and we can clearly see that the bitline contacts are staggered.Â We can also see that there are 38 layers in the stack; 32 wordlines, plus four dummy wordlines, plus the select transistors at top and bottom. 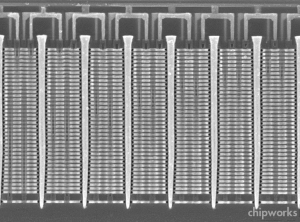 At the moment, thatâ€™s as far as weâ€™ve got; we donâ€™t yet have any materials analysis, but my guess is that the three interconnect layers are tungsten, copper and aluminum, as in a lot of other Samsung memory chips.

We will of course being preparing a report on this seminal part, so for more details contactÂ Chipworks, or keep an eye on my Twitter account, @ChipworksDick. Â Once the dust has settled, I hope to get into a bit more detail in a future blog in a few months time.