Supply of driver IC is forecast to tighten throughout 2018, estimated to exceed demand by 4 percent, per the new Display Driver IC Market Tracker by IHS Markit. Foundries have cut their production capacity of cheap driver ICs while increasing production of high-profit ICs and large-scale integrations (LSIs), mainly to satisfy orders from industries producing Internet of Things (IoT) and automotive technologies.

The average driver IC price increased by about 10 percent during the first half of 2018. Tight supply of driver ICs has impacted the prices of IT panels, such as desktop monitors, notebook PC and tablet PC panels, and has also extended into TV and smartphone panel prices since the third quarter of 2018.

Glass substrates are also in a tight supply situation since the beginning ofÂ  third quarter2018, according to the Display Glass Market Tracker by IHS Markit. The supply-demand glut in the third quarter has been below 5 percent, which is considered a tight supply threshold, while taking into account later delivery times.

According to the Display Optical Film Market Tracker by IHS Markit, polarizers have been in a tight supply situation since the third quarter. In July, film makers, such as Dai Nippon Printing and Nitto Denko, stopped operations for more than a week due to heavy rain in Japan. The production facilities are not damaged directly, but damaged infrastructures, such as roads, waterworks and electric facilities, have caused delivery delays.

Logistics issues remain even though operations have resumed. â€śNon-TAC polarizers, especially acryl polarizers, were already in tight supply but the recent floods have made the situation worse,â€ť said Irene Heo, senior principal analyst at IHS Markit. Polarizer supply-demand glut is expected to be 4 percent in the third quarter, below the 5 percent balance bar.

The cash cost of a typical 32-inch high-definition (HD) open cell is expected to decline 1.4 percent in third quarter2018 compared to a year ago, according to the Large Area Display Cost Model. The contraction rate has slowed from 2.9 percent in the same period last year. â€śThe main reason for the slow cost reduction is the increasing price of driver ICs,â€ť Uno said. â€śHowever, glass substrate and polarizer price reductions have been relatively stable.â€ť 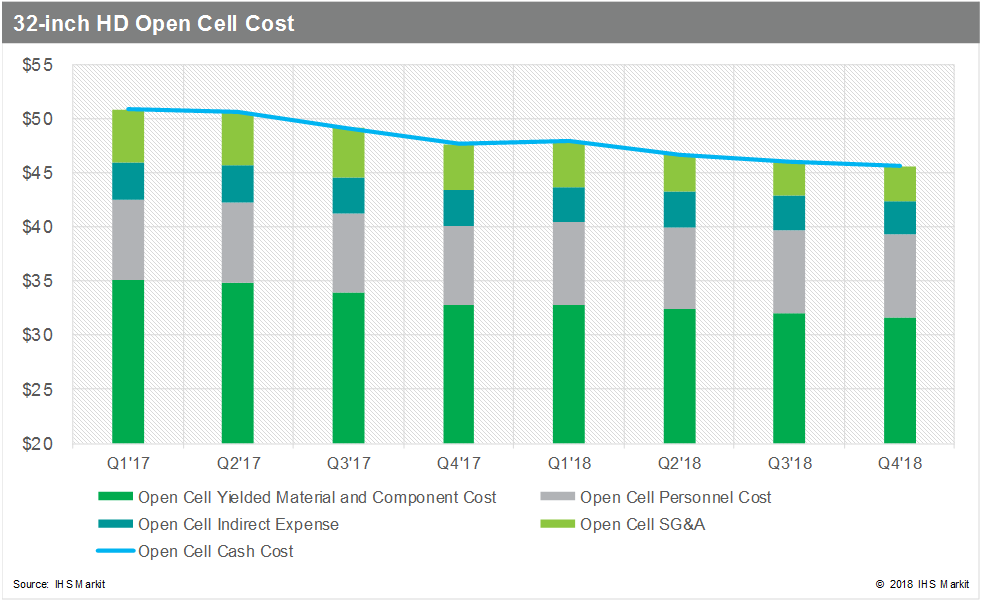