Total fab equipment spending in 2019 is projected to drop 8 percent, a sharp reversal from the previously forecast increase of 7 percent as fab investment growth has been revised downward for 2018 to 10 percent from the 14 percent predicted in August, according to the latest edition of the World Fab Forecast Report published by SEMI.

Entering 2018, the semiconductor industry was expected to show a rare fourth consecutive year of equipment investment growth in 2019. But the SEMI World Fab Forecast Report, tracking more than 400 fabs and lines with major investment projects, forecast in August a slowdown in the second half of 2018 and into the first half of 2019. Now, with recent industry developments, a steeper downturn in fab equipment is expected (Figure 1).

Plunging memory pricesÂ and a sudden shift in companiesâ€™ strategies in response to trade tensions are driving rapid drops in capital expenditures, especially among leading-edge memory manufacturers, some fabs in China, and some projects for mature nodes such as 28nm. Industry sectors expecting record-breaking growth in 2019, such as memory and China, are now leading the decline.

Memory makers have quickly responded to changing market conditions by adjusting capital expenditures (capex), and tool orders have been put on hold. DRAM spending may see an even deeper correction in 2019 while NAND flash-related investment could also suffer a double-digit decline next year.

A review of spending by industry sector reveals that, while memory capital expenditures were expected to grow by 3 percent in 2019, they are now forecast to drop by 19 percent year-over-year (YOY). DRAM is hit the hardest with a fall of 23 percent, while 3D NAND will contract 13 percent in 2019.

China and Korea are suffering the largest drops in spending since the August report.

Projections for equipment spending in China in 2019 have been revised from US$17 billion in August to US$12 billion, with multiple factors at play including a slowing memory market, trade tensions, and delays in some project timelines.

SK Hynix is expected to slow DRAM expansion in 2019. GLOBALFOUNDRIES reconsidered its plan for the Chengdu fab, delaying the ramp. SMIC and UMC are slowing spending. The Fujian Jinhua DRAM project has been put on hold.

In August, SEMI forecast that Korea fab equipment spending would decline by 8 percent, to US$17 billion, in 2019 â€“ a projection that has now been slashed to US$12 billion, a drop of 35 percent YoY. Samsung began to reduce equipment investments in the fourth quarter of 2018, and the spending cuts are expected to continue into the first half of 2019. Samsungâ€™s largest projects to be hit are P1 (slowdown) and the ramp of P2 Phase 1 (delayed). Adjustments to the S3 schedule are also expected.

While SEMIâ€™s detailed, fab-level data show that some memory makers will scale back capital expenditures for 2019, one company stands out. Micron will increase capex for FY19 to US$10.5 billion, up about 28 percent, or $8.2 billion, from FY18. Micron plans to expand and upgrade facilities, invest less in NAND in FY19 than in FY18, and anticipates no new wafer starts.

In other sectors, especially for non-leading-edge and specialty technologies, some fabs are still increasing investments (Figure 2). 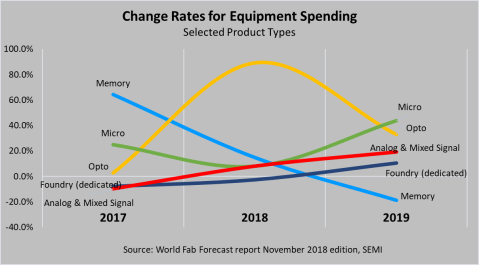 Opto â€“ especially CMOS image sensors â€“ shows strong growth, surging 33 percent to US$3.8 billion in 2019. Micro (MPU, MCU and DSP) is expected to grow more than 40 percent in 2019 to US$4.8 billion. Analog and mixed signal investments also show strong growth â€“ 19 percent â€“ in 2019, bringing spending to US$660 million. The foundry sector, the second largest product segment in total investments at US$13 billion, shows a 10 percent rise in 2019.

The recent three-year boom in the semiconductor market was chiefly driven by the memory sector (e.g. DRAM and 3D NAND flash). One company, Samsung, invested at unprecedented levels, lifting the entire industry. Other memory makers rode the wave of the boom cycle by boosting investments. And Chinaâ€™s profile rose with its huge investments. The industry was poised for four consecutive years of revenue growth â€“ a streak not seen since the 1990s.

Now the industry faces well-known threats of inventory correction and the trade war. Both phenomena could slow growth significantly and if both unfold in full force in tandem, the impact could be serious. The data in SEMIâ€™s latest publication of the World Fab Forecast show that the four-year growth streak will not materialize.

Since its August 2018 publication, more than 260 updates have been made to the World Fab Forecast. The report now includes more than 1,280 records of current and 115 future front-end semiconductor facilities from high-volume production to research and development. The report covers data and predictions through 2019, including milestones, detailed investments by quarter, product types, technology nodes and capacities down to fab and project level.