IC Insightsâ€™ new 185-pageÂ Mid-Year UpdateÂ to The McClean Report, which will be released later this week, examines the recent surge of M&A activity, including Chinaâ€™s aggressive new programs aimed at bolstering its presence in the semiconductor industry.

It would be hard to characterize the huge wave of semiconductor mergers and acquisitions occurring in 2015 as anything butÂ M&A mania, or evenÂ madness. Â In just the first six months of 2015 alone, announced semiconductor acquisition agreements had a combined total value of $72.6 billion (Figure 1), which is nearly six times the annual average for M&A deals struck during the five previous years (2010-2014). 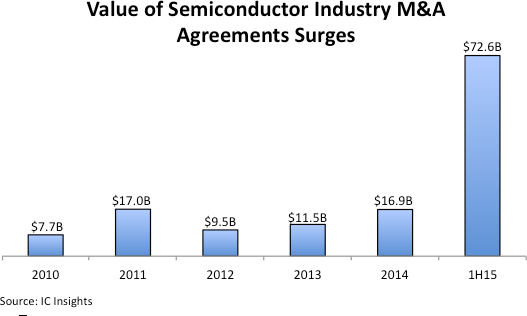 In many ways, 2015 has become a perfect storm for acquisitions, mergers, and consolidation among major suppliers, which are seeing sales slow in their existing market segments and need to broaden their businesses to stay in favor with investors. Â Rising costs of product development and advanced technologies are also driving the need to become bigger and grow sales at higher rates in the second half of this decade. Â The emergence of the huge market potential for the Internet of Things (IoT) is causing major IC suppliers to reset their strategies and quickly fill in missing pieces in their product portfolios. Â Chinaâ€™s ambitious goal to become self-sufficient in semiconductors and reduce imports of ICs from foreign suppliers has also launched a number of acquisitions by Chinese companies and investment groups.

IC Insights believes that the increasing number of mergers and acquisitions, leading to fewer major IC manufacturers and suppliers, is one of major changes in the supply base that illustrate the maturing of the industry. Â In addition to the monstrous M&A wave currently taking place, trends such as the lack of any new entry points for startup IC manufacturers, the strong movement to the fab-lite business model, and the declining capex as a percent of sales ratio, all promise to dramatically reshape the semiconductor industry landscape over the next five years.

Korea is at full throttle on memory investments

Worldwide semiconductor revenue grew 22.2% in 2017; Samsung takes over No. 1 position

Korea is at full throttle on memory investments

ASML announces appointment of new CFO to the Board of Management