This yearŌĆÖs Advanced Lithography TechXPOT at SEMICON West will explore the progress on extreme ultra-violet lithography (EUVL) and its economic viability for high-volume manufacturing (HVM), as well as other lithography solutions that can address the march to 5nm and onward to 3nm. Several session speakers offered their insights into the readiness of EUVL for 5nm and how other lithography solutions will enable 3nm. See the full list of speakers and program agenda at http://www.semiconwest.org/programs-catalog/lithography-5nm-and-below.

ASML expects its first customer to start volume manufacturing with EUV at the 7nm logic node and the mid-10nm DRAM node in the 2018/2019 timeframe. ŌĆ£EUV will replace the most difficult layers that require multiple patterning, and many layers will continue to be allocated to immersion tools for the foreseeable future,ŌĆØ said Lercel. ŌĆ£For the 5nm logic node, more layers are expected to migrate to EUV.ŌĆØ

ASML has achieved good industrialization progress of its pellicle, with tests confirming that pellicles can withstand 245W source power and an offline power lifetime test indicating 400W capability. Compared to the 7nm logic node, the requirements for EUV masks will become tighter at 5nm, but Lercel noted that ASML sees good progress with the industry infrastructure to support 5nm in areas such as reducing mask blank defects. ŌĆ£We will continue to improve pellicle transmission for enhanced throughput, but there are no fundamental changes in pellicle requirements for 5-3nm logic nodes. We see no infrastructure showstoppers for the introduction of EUVL at the 5nm node.ŌĆØ

Renwick said that the 7nm logic node is expected to be fabbed mostly using 193i lithography. ŌĆ£EUV will struggle to be ready for 5nm, limited by yield issues caused by stochastic effects in the resist,ŌĆØ said Renwick.┬ĀŌĆ£Ready or not, though, it will be used.ŌĆØ┬ĀRenwick suggests that introducing multiple-patterning with EUV may be needed but would increase costs. ŌĆ£193i lithography will continue to be used with quadruple-patterning and in combination with other techniques ŌĆō there is no single solution.ŌĆØ 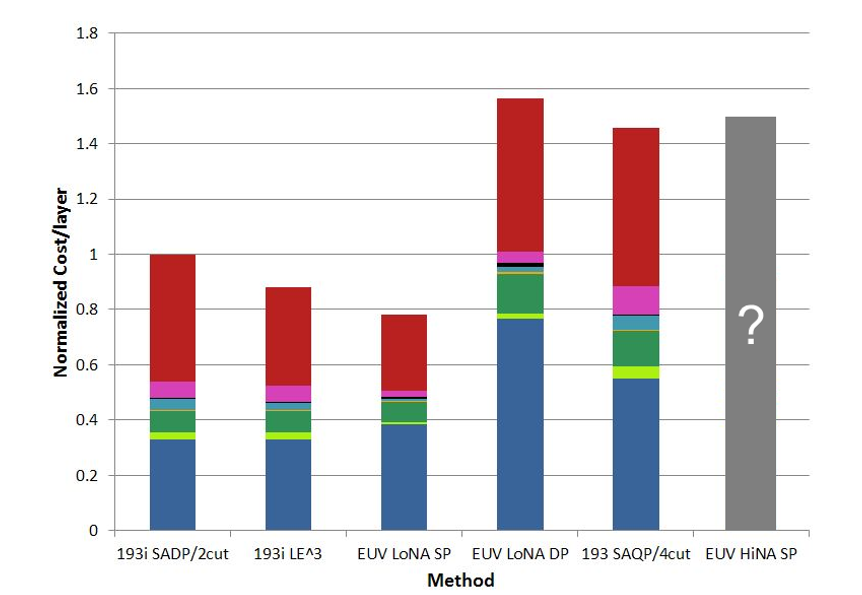 Other challenges Renwick sees on the horizon for EUVL at 5nm are stochastic effects in EUV resists. ŌĆ£They cause yield problems on contact arrays and unacceptable line-edge roughness on line/space patterns,ŌĆØ said Renwick. ŌĆ£ItŌĆÖs unlikely that these effects will go away without increasing the litho dose, which will further challenge throughput performance.ŌĆØ He also questions whether EUV pellicles, though under development, will be ŌĆ£ready for prime time.ŌĆØ 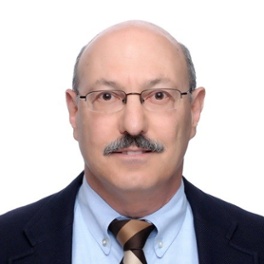 Levinson said additional fundamental engineering work is needed to ready EUV lithography for 5nm. ŌĆ£Among the top problems are stochastics-induced resist defects, which increase significantly as dimensions shrink below those for 7nm,ŌĆØ explained Levinson (Figure 2). ŌĆ£Higher exposure doses will be required to address these issues related to stochastics at 5nm, which will require higher source outputŌĆØ (than 7nm).

Levinson said there will be greater motivation to use EUVL at the 5nm node vs. at 7nm to offset the large number of exposures associated with 193nm immersion multiple-patterning solutions. ŌĆ£The primary application of EUV lithography at 7nm will be for contact, via and cut layers,ŌĆØ Levinson noted. ŌĆ£It will be important to enable EUVL for metal masks at the 5nm node, which increases the need for an ample supply of very low defect EUV mask blanks.ŌĆØ Levinson added that the 7nm node is already stressing defect inspection capabilities, and no actinic defect inspection system is yet available for patterned masks. ŌĆ£This situation becomes more problematic with widespread application of EUVL to metal layers.ŌĆØ

Progler said that the basic infrastructure for delivering EUV masks is available, especially for dark field layers and near in nodes. ŌĆ£The interconnected or more open frame patterns will need refinements to the processes and two to three nodes out will need certain new infrastructure,ŌĆØ said Progler. Overall, the main challenges for initial insertion are about creating a cost-effective and rapid-turn EUV mask process, he said. ŌĆ£The industry can certainly deliver EUV masks in some form. It is more a question of doing it efficiently and productively to match the stated value proposition of EUV over other lithographic methods. We donŌĆÖt want a pick two of ŌĆścost, cycle time, capabilityŌĆÖ sort of mask solution.ŌĆØ

More specifically, Progler explained that after the initial EUV mask development for 5nm focused on contacts and block layers, the major push for N5 switched to delivering single-exposure EUV metal patterning as early as possible. ŌĆ£This has opened some new challenges for masks given the resolution, critical pattern density and tight pitch defect requirements of the re-aggregated single-layer metal mask designs,ŌĆØ said Progler. ŌĆ£For example, on the resolution side, we are accelerating the insertion of higher dose photoresists and also driving patterning module improvements in CD control, mask LER and sidewall angle.ŌĆØ Progler added that at N5, the mask 3D structure itself ŌĆō including the sidewall ŌĆō will have a greater impact on lithography because it is tied to stochastic error rates on the wafer.

ŌĆ£Reliable, wide-area metrology for some of these 2D and 3D mask parameters is currently hard to come by. We may see an evolution of the blank structure at some point in N5, including hard mask options for pattern stability and expect earlier insertion of EUV mask process correction with model-based hot spot detection and rule checking as well. We also hope mask-scanner dedication is not needed, but there are some indications process sensitivity may push us earlier in this direction.ŌĆØ He added that to reduce metal layer defects, more attention needs to be devoted to advanced repair and model-based validation. ŌĆ£We are, unfortunately, still in a situation of blurry vision and high native defect counts alongside possible in situ contamination during mask changes.ŌĆØ 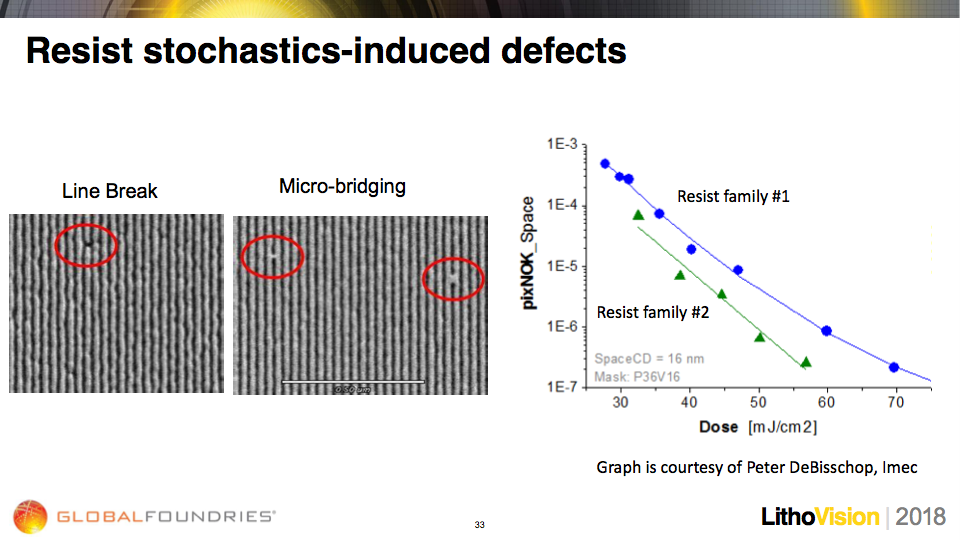 Progler pointed out that, with the advent at 5nm, metal masks will require some level of actinic blank inspection for yield, increasing the cost of an already expensive mask technology. ŌĆ£So, unless we want to contend with double and triple photomasksŌĆÖ starts to deliver a single metal layer, it will be very important to tighten the multi-sensor inspection, defect abatement, and repair loops,ŌĆØ said Progler. He does see some clouds forming around high-volume manufacturing pellicles for metal layers. ŌĆ£This remains an open question, mainly for thermal and materials reasons, not to mention cost and cycle time,ŌĆØ Progler said. ŌĆ£We may be pessimistic, but we do not see an HVM pellicle solution converging in the required timeframe, which means leaning even more on a wafer-level inspection in the validation loop.ŌĆØ He believes that streamlining validation will be a differentiator. ŌĆ£I can imagine one losing most of the EUV cycle time benefits by endlessly circling masks around if this is not done well.ŌĆØ

ASML plans to ship its first high-NA EUV prototope/pilot systems between 2020 and 2023 to support 3-2nm process development. ŌĆ£System designs are now being finalized and the platform is starting to come to life,ŌĆØ said Lercel. ASML supplier ZEISS is building a high-NA cleanroom for optics production. ASML believes that EUV, high-NA and DUV systems will be used together at the most advanced nodes and is designing to account for this mixed environment. ŌĆ£As chipmakers drive toward smaller geometries in the most advanced nodes like 3nm, they face unprecedented challenges in devices and materials. This will make the process control requirements even more challenging.ŌĆØ ASML is tackling these challenges with its YieldStar metrology platform, e-beam metrology (HMI) and computational lithography solutions that are designed to expand the process window, enhance process control, and improve patterning defect detection. ŌĆ£This ŌĆśHolistic LithographyŌĆÖ approach will become increasingly important to ensure throughput and yield at the most advanced nodes.ŌĆØ

Levinson said that the issues he projects for 5nm will need to be addressed further at 3nm. ŌĆ£The challenges associated with resists at 3nm dimensions are such that it isnŌĆÖt clear that chemically amplified resists will be capable of meeting requirements,ŌĆØ said Levinson. ŌĆ£If true, we would be seeing the most significant change in resist platforms in a quarter of a century. Potentially cost-reducing technologies such as directed self-assembly (DSA) are always welcome, but EUVL will be the lithographic workhorse through the 3nm node, and likely beyond.ŌĆØ

At 3nm, mask makers will confront the realities of higher EUV NA tools. ŌĆ£We will need to implement thinner mask absorbers, new films, and perhaps hard masks,ŌĆØ Progler said. ŌĆ£This puts us in a new materials regime for masks, and history has shown us the mask industry takes a long time to refine processes and tools for new mask materials.ŌĆØ He explained that the small scale of the mask ecosystem and the small number of large suppliers available to address the challenges accounts for this lengthy time frame.

Still, looking ahead, Progler noted that Photronics has already done a few studies on the impact of proposed half-field, high NA anamorphic optics on masks. “We uncovered some challenges that need to be addressed, particularly at boundaries and within the overall mask flow,ŌĆØ said Progler. As mask resolution continues to scale down, the industry will need fundamentally higher resolution mask making and inspection processes, requiring next-generation multi-beam mask writing and electron beam inspection, he explained.

At 3nm and below, Progler noted that the metrology needs for masks, while not as severe as that for wafers at these nodes, will test the mask equipment infrastructure in ways that could challenge the relatively small mask industry. ŌĆ£Of course, EUV multi-patterning comes into play as well, and with that, the SRAF sizes will drop below 20nm, requiring an asymmetric compensation over a much wider influence area than the OPC people are used to considering.ŌĆØ With EUV multi-patterning, Progler explained that it will be increasingly important to match or pair EUV masks and to consider how 3D effects and stochastics will drive new technology to enable new requirements for high-speed metrology and simulation components. ŌĆ£All the justifiable hand-wringing over EPE with ArF multi-patterning today gets introduced to the EUV scene when masks are ganged together to make a single device layer,ŌĆØ said Progler.