To eliminate voids, it is important to control the process to minimize moisture absorption and optimize a curing profile for die attach materials.

Polymeric die attach material, either in paste or in film form, is the most common type of adhesive used to attach chips to metallic or organic substrates in plastic-encapsulated IC packages. It offers many advantages over solders such as lower processing temperatures, lower stress, ease of application, excellent adhesion and a wide variety of products to meet a specific application. As microelectronics move towards thinner, smaller form factors, increased functionality, and higher power density, void formation in die attach joints (FIGURE 1), i.e. in die attach materials and/or at die attach interfaces, is one of the key issues that pose challenges for thermal management, electrical insulation and package reliability. 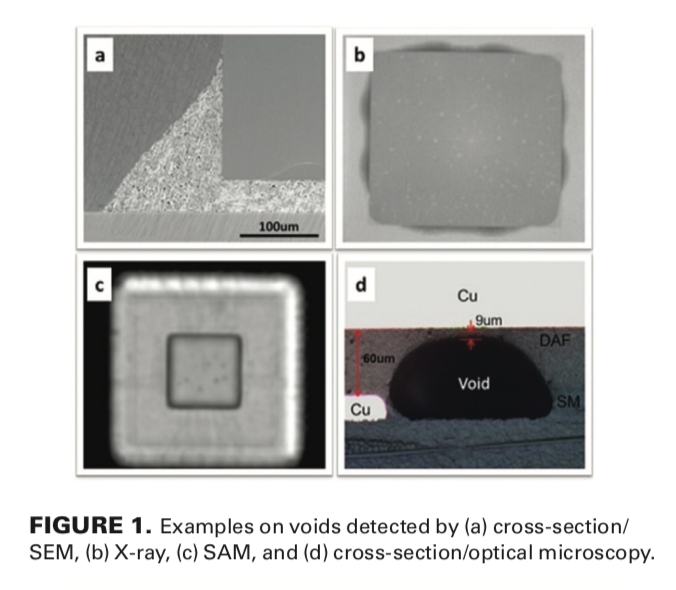 Voids in die attach joints have a significant impact on die attach material cracking and interfacial delamination. Voids increase moisture absorption. If plastic packages with a larger amount of absorbed moisture are subject to a reflow process, the absorbed moisture (or condensed water in the voids) will vaporize, resulting in a higher vapor pressure. Moreover, stress concentrations occur near the voids and frequently are responsible for crack initiation. On the other hand, voids at the interface can degrade adhesive strength. The combined effect of higher vapor pressure, stress concentration around the voids and decreased adhesion, as a result of void formation, will make the package more susceptible to delamination and cracking [1].

Additionally, heat is dissipated mainly through die attach layer to the exposed pad in plastic packages with an exposed pad. Voids in die attach joints can result in a higher thermal resistance and thus increase junction temperatures significantly, thereby impacting the power device performance and reliability.

The ability to detect voids is key to ensuring the quality and reliability of die attach joints. There are four common techniques to detect voids: (1) Scanning Acoustic Microcopy (SAM), (2) X-ray imaging, (3) cross-section or parallel polishing with optical or electron microscope, and (4) glass die/slide with optical microscope (Fig. 1). The significant advantage of SAM over other techniques lies in its ability to detect voids in different layers within a package non-destructively. Void size detection is limited by the minimal defect size detected by SAM. If the void is too small, it may not be detected at all, depending on the package and equipment used. X-ray analysis allows for non-destructive detection of voids in silver-filled die attach materials. However its limits lie in its low resolution and magnification, a low sensitivity for the detection of voids in a thick sample, and its inability to differentiate voids at different interfaces [2]. Cross-section or parallel polishing with electronic microscope provides a very high magnification image to detect small voids, although it is destructive and time-consuming. Glass die or glass substrate with an optical microscope provides a simple, quick and easy way to visualize the voids.

Freeze-thaw voids When an uncured die attach paste in a plastic syringe is removed from a freezer (typically -40oC) to an ambient environment for thawing, the syringe warms and expands faster than the adhesive. This intro- duces a gap between syringe and the adhesive. Upon thawing, the adhesive will re-wet the syringe wall and air located in between the container and adhesive may become trapped. As a result, voids form. This is referred as freeze-thaw void [3]. The voids in pastes may cause incom- plete dispensing pattern leading to inconsistent bond line thickness (BLT) and die tilt, thus causing delamination. Planetary centrifugal mixer is the most commonly used and effective equipment to remove this type of void.

Die attach material contains polar functional groups, such as hydroxyl group in epoxy resins and amide group in curing agents, which will absorb moisture from the environment during exposure in die attach process. As the industry moves to larger lead frame strips (100mm x 300mm), the total number of units on a lead frame strip increase significantly. As a result, die attach pastes may have been exposed to a production environment significantly longer before die placement. After die placement, there could also be a significant amount of waiting time (up to 24 hours) before curing. Both can result in a high moisture absorption in die attach pastes. Moreover, organic substrates can absorb moisture, while moisture may be present on metal lead frame surfaces. As temperatures increase during curing, absorbed moisture or condensed water will evolve as stream to cause voiding. Voids can also form at the DAF-substrate interface as a result of moisture uptake during the staging time between film attach and encapsulation process. Controlling moisture absorption of substrates and die attach materials at each stage before curing and production environment are critical to prevent moisture induced voids in die attach joints.

One challenge associated with DAF is voiding during DAF lamination, especially when it is applied to organic substrates [FIGURE 1(d)]. There is a correlation of void pattern with the substrate surface topography [4]. Generally, increasing temperature, pressure and press time can reduce DAF melt viscosity and enable DAF to better wet lead frame or substrates, thereby preventing entrapment of voids at die attach process. If the DAF curing percentage is high before molding, then DAF has limited flow ability, and thus cannot completely fill the large gaps on the substrate. Consequently, voids present at the interface between DAF and an organic substrate since die bonding process. But if DAF has a lower curing percentage before molding, then DAF can re-soft and flow into large gaps under heat and transfer pressure to achieve voids-free bond line post molding [4]. 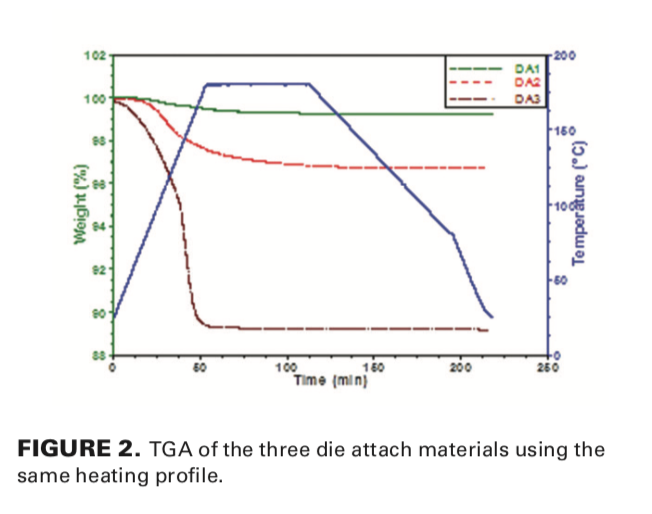 Voids in die attach joints are generally formed during thermal curing since die attach pastes contain volatiles such as low molecular weight additives, diluents, and in some cases solvents for adjusting the viscosity for dispensing or printing. To study the effect of outgassing amounts on voids, we select three commercially available die attach materials with a significant difference in outgassing amounts using the same curing profile. As shown in FIGURE 2, as temperature increases, all die attach pastes outgas. DA1 shows a weight loss of 0.74wt%, DA2 3.1wt% and DA3 10.62wt%. Once volatiles start to outgas during thermal curing, they will begin to accumulate within the die attach material or at die attach interfaces. Voids begin to form by the entrapment of outgassing species or moisture. After voids initially form, voids can continue to grow until the volatiles have been consumed or the paste has been cured enough to form a highly cross- linked network. FIGURE 3 shows optical images of dices assembled onto glass slides using three die attach materials. As expected, DA1 shows no voids for both die sizes of 2.9mm x 2.9mm and of 9.0mm x 9.2mm, due to a very low amount of outgassing (0.74wt%). DA2 shows no voids for the small die size, but many small voids under the die periphery for the large die. Large voids are observed for DA3 for both die sizes since it has a very large amount of outgassing (10.62wt%). DA2 also shows voids even with a medium die size 6.4mm x 6.4mm [FIGURE 3(g)]. Differential Scanning Calorimetry (DSC) was used to further study the curing behaviors of DA2 and DA3, as shown in FIGURES 4 and 5. Comparing FIGURE 4 with FIGURE 5, it is interesting to observe the difference in thermal behavior of the two die attach materials. For DA2, as curing starts, the weight loss rate becomes slower, while the weight loss rate for DA3 accelerates as curing starts. It is very likely that the outgassing species in DA2 is reactive diluent, which has a lower weight loss rate when the reaction starts. But for DA3, outgassing is a non-reactive solvent, and possibly with other reactive species. The non-reactive solvent has a boiling point at 172.9oC, as verified in the DSC. Heat generated in the curing process accelerates evaporation of the solvent. The continuous, slow release outgassing amount during ramp and curing at 180oC explains the formation of small voids in DA2, while fast evaporation of solvent accounts for large voids in DA3. To reduce or eliminate voids during thermal curing, a simple and the most common approach is to use a two-step (or multi- step)cure.Thefirststepisdesignedtoremovevolatiles, followed by a second step of curing. With the first step at 120oC for 1h to remove more volatiles, DA2 shows significantly less voids for a die size of 6.4mm x 6.4mm [FIGURE 3(h)]. 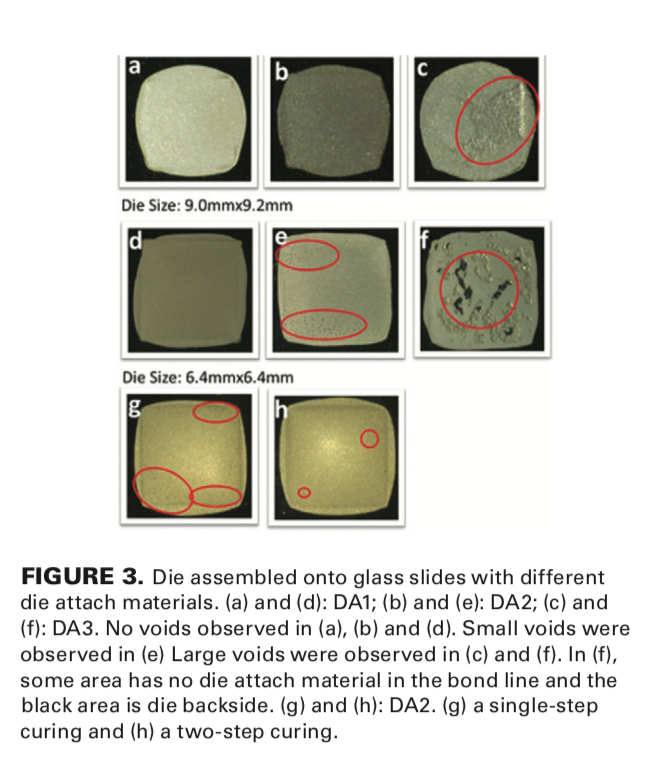 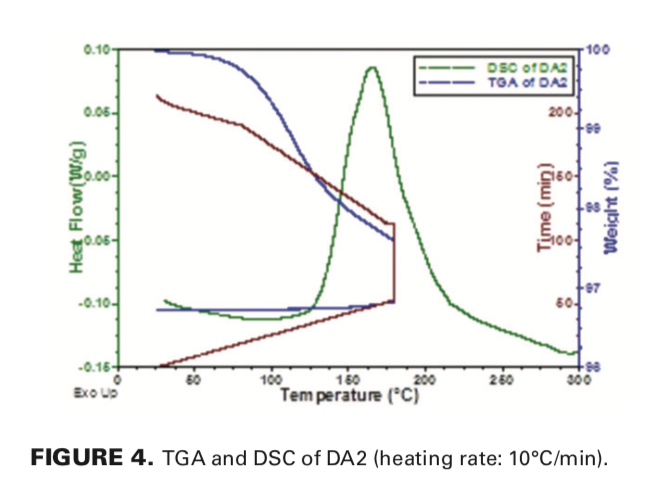 Ideally, the majority (if not all) of volatiles should be removed prior to the gelation point, which is defined as the intersection of Gâ€™ and Gâ€™â€™ in a rheological test. Because the viscosity of die attach, materials increases dramatically after their gelation point. A higher amount of volatiles released after gelation point (or later stage of curing) are more likely to form voids. Therefore, the combined characterization of TGA and DSC, as well as rheological test, provides a good guideline to design optimal curing profiles to minimize or eliminate voids. 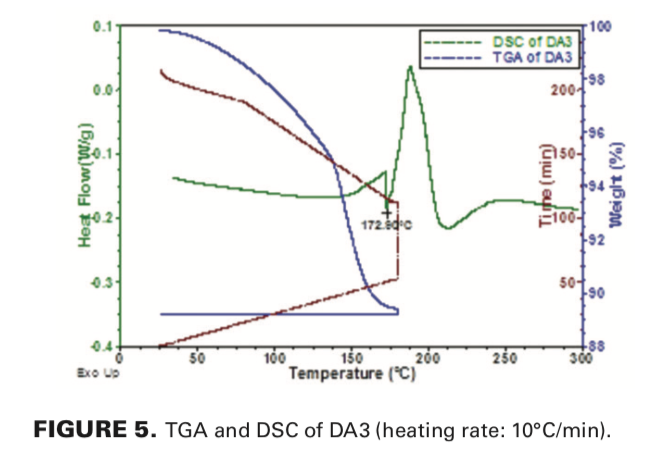 This article provides an understanding of void impact in die attach joints, the techniques to detect voids, voiding mechanisms, and their corresponding solutions. To eliminate voids, it is important to control the process to minimize moisture absorption and optimize a curing profile for die attach materials. TGA, DSC and Rheometer are key analytical tools to optimize a curing profile to prevent voiding. In addition, many other properties such as modulus, coefficient of thermal expansion (CTE), and adhesion need to be considered when optimizing curing profiles. Last but not least, it is crucial to develop die attach materials with less outgassing and moisture absorption without compro- mising manufacturability, reliability and performance.